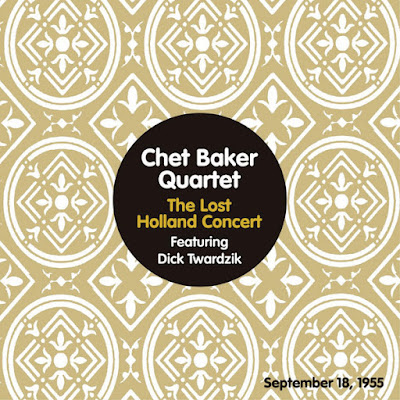 In September, 1955, Chet Baker took his new quartet to Europe for a tour. His pianist Richard "Dick" Twardzik was a promising 24-year-old but a heroin addict and he died from an overdose on October 21 of that year. The number of his recordings are few, so any "new" concert performances are very valuable. The music on Lost Holland Concert September 18 1955 was all previously unissued and features the Chet Baker Quartet during concerts performed September 18, 21, and 24. While bassist Jimmy Bond and drummer Peter Littman are fine in support, the main focus is on Baker and Twardzik. Baker verbally introduces the songs and expresses his admiration for Miles Davis but at this point in time he had not come under Davis' influence yet and still sounds both youthful and original, playing in his early prime. Twardzik, while influenced by Bud Powell and a bit reminiscent in spots of his predecessor Russ Freeman, shows loads of potential that would never be realized. On "All the Things You Are," the quartet is joined by guest trumpeter Rolfe Schnoebiegel who fits in well and adds a bit of excitement. Dick Twardzik's death kept the quartet's tour from being an expected triumph, though Baker would continue in Europe for a few more months. While the recording quality of this CD is far from impeccable (and the closing "Moonlight in Vermont" is incomplete), it is quite listenable, with the historic value of the music making this a recommended set to collectors of Chet Baker and the short-lived Dick Twardzik.
Posted by Zen Archer at 7:09:00 PM