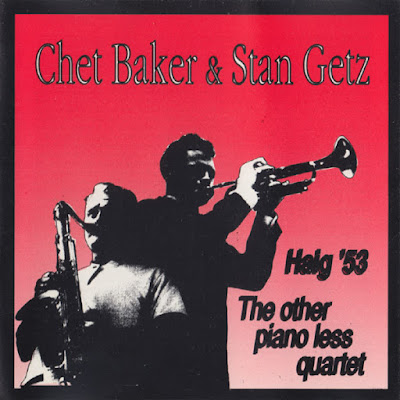 The "Haig" here doesn't signify Al, but the Haig was a Los Angeles-based nightspot where this date was recorded on June 24, 1953. This is still a very early date for Chet Baker, whose first session as a leader for Pacific Jazz lay a month in the future. Baker's public career began as the star trumpet man in Gerry Mulligan's famous "piano-less quartet," and this is that same group, minus Mulligan, who by this date had been jailed on a narcotics charge. Stan Getz, fresh from his first conquest of Scandinavia, agreed to fill Mulligan's shoes on the last few dates the quartet had already booked, thus bringing together Getz and Baker on this live recording. CD annotator Roberto Capasso, in translation, lavishes praise on this recording in badly written notes that are printed in a small, solid block of text, both difficult to read and none too rewarding for the effort. He evaluates this session as being typified by "harmonious melting of the voices and the delicate pattern of the solos"; actually, this is a recording of a couple of fellows who don't know how to get out of each other's way. Haig '53: The Other Pianoless Quartet is mainly a train wreck in the making, but it stays interesting up through to the end of "Move." Afterward, Getz and Baker can't come to an agreement of how to put over the melody of "Mulligan's Soft Shoe," so only splintered fragments of the tune are given. Baker completely falls apart during "Whispering" and is forced to bail out short of completing his second chorus. Bassist Carson Smith gets a solo during "All the Things You Are," probably because by that time both frontmen had temporarily abandoned the piece. Roughly half of this date has been issued before as LA Get-Together on Fresh Sounds (CD-1022). The Fresh Sounds disc also includes two earlier pieces from this session which do not appear here, "Yardbird Suite" and "Half Nelson." As these numbers were performed early in the set, they are probably to be preferred over much of what appears on the Philology release. Also, the Fresh Sounds disc wisely withheld the last five numbers of this session, which likely should've stayed in the can; this Philology release marks these tracks' first appearance on disc. Despite Philology's identification of Joe Mondragon as bassist and Chico Hamilton as drummer, this is certainly Larry Bunker on drums and Carson Smith on bass -- perhaps the names were deliberately changed to those of sidemen whose work is more familiar to Europeans than these L.A.-based "locals." The sound is very good for a live club date of this period, with the usual minor amount of wow, flutter, and dropouts you would expect from a 1953 tape. The audience is pretty quiet as well, although during one of the later pieces somebody in the crowd at a close table decides to cough up a lung. Altogether, Haig '53: The Other Pianoless Quartet is mostly just a historical curiosity, and serves as testament to the long-standing friction between Stan Getz and Chet Baker -- artists who were stylistically similar to the extent that they should've gotten along -- but they didn't, and both players are far better-served on their own turf. ~ Uncle Dave Lewis, All Music Guide