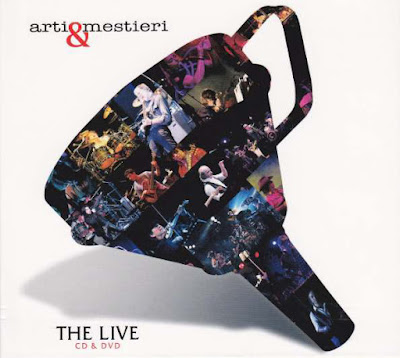 This CD+DVD was taken from two different concerts: the CD from the Festival at ClubCittà in Kawasaki, Japan, on November 5, 2011 and the DVD from the Festival of Veruno, Italy, on September 2, 2011, with special guests: guitarist Gigi Venegoni, original member of the formation, in the CD, and Mel Collins and David Cross, ex King Crimson, in the DVD.This production tells perfectly the two musical paths woven into the history of the group, developing with various improvisations and just the mood of the individual members.

Two previously unreleased extra tracks: Veruno (the two Crimson) and an Italian version of Exiles, make the performance unique. Arti & Mestieri, which are now back in the studio for a new unreleased album coming out later this year, show, even if there was need, that they are a live band that knows how to deliver an incredible potential.

The reinterpretations of the songs, makes them completely different from the original ones, adding a new freshness and vivacity that will allow fans to enjoy the old versions of inestimable refinement, and the new fans to know and appreciate what this band can express on a stage.
Posted by Zen Archer at 3:34:00 AM