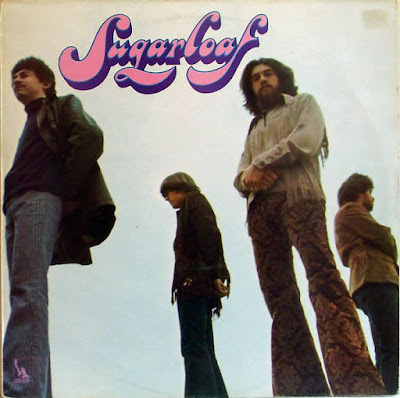 SUGARLOAF are from Colorado in the USA and are pretty much known as a one-hit-wonder because of the opening track "Green-Eyed Lady". This is their debut from 1970 and it's very much hit and miss for me and mostly the latter. I give it 3 stars though because of that opening song which has been a favourite of mine as long as I can remember. And really there's nothing on this album that sounds even close to "Green-Eyed Lady", it's like we get a different band for the rest of the album.
"Green-Eyed Lady" is an absolutely incredible track where i'm blown away by the drumming and bass work. Ditto for the organ play of band leader Jerry Corbetta who is also the singer. Such a proggy track and it has special meaning since i've been hanging out with a beautiful green-eyed lady for many years. Nice organ solo before 3 1/2 minutes then the guitar comes to the fore tastefully. It's awesome to have the almost 7 minute album version of this track because I never want it to end. "The Train Kept-A-Rollin" is a short instrumental cover of THE YARDBIRDS track. Yeah it's okay. "Medley : Bach Doors Man / Chest Fever" opens with an organ solo of that Bach tune reminding me of ELP before blending into another instrumental cover of THE BAND's "Chest Fever". Again this is all okay but does little for me.

"West Of Tomorrow" is a return of the vocals for the first time since the opening song. The organ is again prominant including a solo. It's a little dated but not bad. "Gold And The Blues" is pure blues with the organ, drums and guitar standing out. It's an instrumental and pretty good if your into the blues. I especially like the guitar. "Things Gonna Change Some" is my second favourite track. It's a vocal tune that has some tempo changes. A feel good song for me. I like the instrumental section in the middle where the guitar comes to the fore.

A good album I suppose but yeah one-hit-wonders is a deserved title for this band unfortunately.
Posted by Zen Archer at 6:01:00 PM