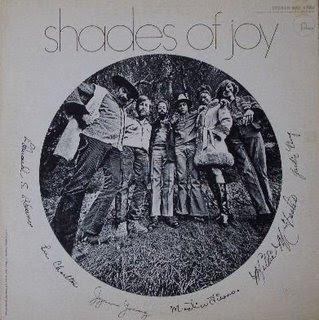 
Shades of Joy was a short-lived supergroup of a bunch of hippies jamming out some funky, trippy, and soothing grooves on a plethora of instruments. It's a mystery who was actually in this loose-knit group but supposedly Jerry Garcia was part of it. If you notice on the cover it says "arranged and conducted by Martín Fierro". After a little research I learned that Martín Fierro was a saxophonist who played with not just The Dead but also The String Cheese Incident, David Grisman, Yonder Mountain String Band, Quicksilver Messenger Service, Sir Douglas Quintet, and the Allman Brothers, just to name a few- holy cow. Sadly, Matín Fierro aka "The Meester" passed away just last year.

Friendly cocktail vocal jazz/faux-Tropicalia/vocal blues/primitive (read: dull) jazz-rock. I grabbed this after hearing of their Music of El Topo album (which I'm listening to next), but nothing I've read about the music of that album is applicable to the music on this one.

The exception is 4th Stride, which goes back and forth between the aforementioned polite jazz and some much, much more out there territory. But it's one track out of nine.
Posted by Zen Archer at 5:30:00 PM