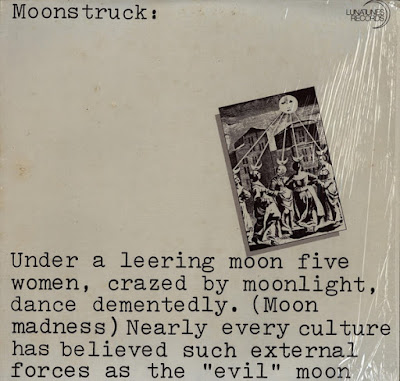 
Instrumental Progressive Rock with strong guitar, flutes, piano and some mellotron with Jazzy overtones (their sole release). Starting off as a cover band in Eastern Canada, Moonstruck quickly morphed into a tight progressive outfit playing small live gigs in the region.   However, without a recording contract, the group privately recorded/pressed these 13 tracks at Solar Audio & Recording (*SAR) studios in Halifax, composing all their own tracks, self-producing and self-financing the effort on their own "Lunatunes" label, reportedly pressing only around 500 copies.
Solar is well known in Canadian vinyl collectors' circles for having pressed some of Canada's rarest LP's to come out of the Atlantic provinces (Blue Max, Happy Dolls, Moonstruck, Molly Oliver (EP), etc).
Posted by Zen Archer at 12:36:00 AM