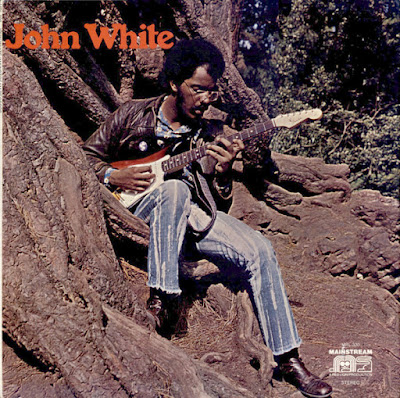 John White who? That's one of the biggest mysteries of Mainstream and his almost comically generic moniker makes it nigh impossible to root out whatever meagre morsel of info might be floating around in the cloud. Making matters worse, this has to be the most poorly documented recording in the entire MRL collection, which in itself is a pretty impressive feat. This time the only crumbs dropped are a roster and a photog credit. No liner notes, no bio, no other credits, no nothin'. To this day it seems no reliable reference can say who produced the affair, who engineered it or even what studio hosted the session on what date(s).

It was obviously a Bay Area endeavour which one can suss not only from the scenery but also from the presence of locals Hadley Caliman, occasional grateful Deadhead Merl Saunders and Terry Hansley of prescient 'frisco freak-out unit Fifty Foot Hose. Phil Wilson could have been anywhere at the time since he was in between gigs with The Butterfield Blues Band and Julius Hemphill's St. Louis cadre while the lack of photo for New Yorker Sonny Red is a tip-off he probably did overdubs back East when the tapes came in to the office, perhaps unsolicited. Merely speculation, of course.

The rest of the crew is a textbook study in nobodies. Go ahead, google 'em. More than likely they were either fellow buskers or jamming partners since none of them forged a musical career of any note. Heck, maybe they coulda just been neighbourhood drug buddies. Which brings us to the obvious hook up for JW's (alleged) only recorded outing, one Hadley Caliman. Since he had previously recorded for Shad and wrote the only track on the disc not composed by White ("Granite & Concrete," covered by Blue Mitchell on Blue's Blues) it's clear Hadley had a strong hand in developing the project.

The music itself is obviously inflected with that spoonful and the playing so loose it stumbles along with an ungainly grace like the musical equivalent of a Drunken Master Style disciple. The firm blues base, earthy electric bass lines and pro touch brought by Wilson and Saunders tether the funky cacophony of the off-kilter horns, offsetting the amateurish aspects of what was obviously a lets-just-get-in-the-studio-and-jam-then-see-what-happens approach. There are a few strong melodies and some genuine moments of inspiration scattered throughout and if it was tightened up in some places and stretched out in others, it might actually be a burner. Had it been released four years earlier it might even have made some impact as is.

Although it's really neither a rock record nor a funk record, White himself is pretty damn funky and riffs as well as proficient both in soloing and in a support role. His appeal lay in the fact he relies less on pyrotechnics than on wringing the right feel from his instrument to convey the emotional aspect of his material like a classic bluesman. However, adept as he is, no Hendrix he and White would likely be well into the triple-digits in a ranking of music's great electric guitarists. It's an enjoyable listen though, and it's grown on me the last few weeks since it arrived in the post. Definitely worth a listen for those who like horn-laden electric R&B with heavy jazz overtones.
Posted by Zen Archer at 5:48:00 PM