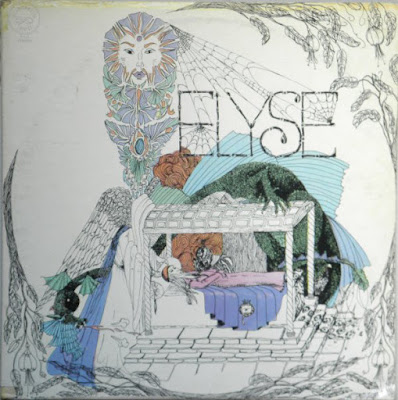 Elyse Weinberg was born in Canada and, after making small waves on the Toronto folk scene in the 1960s (the same place and time as such legendary names as Neil Young and Joni Mitchell), moved to Los Angeles and scored a deal with Bill Cosby's Tetragrammaton Records, a deal helped along from a connection to another star of the time, Mama Cass. Working with a session band -- Touch -- Weinberg soon recorded her debut album, under the moniker (and title) Elyse. A folk-pop record with flourishes of medieval folk and psychedelia -- a pretty standard mix at that point of that particular decade -- Elyse was a minor hit, placing well within the Top 40. Weinberg began hitting the Los Angeles folk circuit, playing shows at such well-known venues as the Troubadour, and even landed an appearance on The Tonight Show on NBC.
by Chris True

As an enthusiastic record collector, I often find myself searching through stacks of records at thrift stores and yard sales, always hoping to come across the "holy grail", some amazing psychedelic record from the late 1960's by some long forgotten obscure artist. Over the years, this "holy grail" had eluded me, until one day in 1999, while on a cross country trip, I was rummaging through a box of records in a thrift store in Missoula, Montana and came across a record cover featuring a beautiful and strange drawing of a knight kneeling beside a maiden on their deathbed, with a dragon watching over her. The title simply said "Elyse", and the price was one dollar. I felt compelled to buy it, and when I got home and gave it a listen, I knew I had found my "holy grail".

The album was a mixture of pastoral folk/rock, tripped out psychedelia, and orchestrated strings and horns in the style of the Beatles' "Sgt. Pepper's..." album. What really blew me away was the singing. Elyse's voice manages to be very pretty and melodic, while also sounding very desperate and ragged, quivering and shaking through songs brimming with a sense of impending doom. Scary and magical stuff. Highlights include "John Velveteen", an incredibly moving and tragic narrative about a knight watching his lovely maiden die (this is the song portrayed by the cover art), a heart wrenching cover of Bert Jansch's "Deed I Do", and the acid drenched, sound effect laden freakout of "Iron Works". Released in 1968, "Elyse" actually received much critical acclaim, and while not a commercial hit, sold fairly well, even prompting an appearance on Johnny Carson's "Tonight Show".

Two more albums were recorded but never released. Included on this CD reissue are two songs from this era, one of which, "Houses", features Neil Young wielding his distinctively ripping guitar sound. Elyse grew up and got her start performing in Toronto alongside friends like Young and Joni Mitchell. She later moved to Los Angeles where she recorded "Elyse", and has since lived in London, New Mexico, and Ashland, Oregon where she currently lives. She still writes and plans to record an album of new material in the near future. I hope you all enjoy this magical and wonderful album, a true lost classic, and one of the best albums of the 1960's or any other time! Thanks to Laura Carter for the layout and Derek Almstead, who re-mastered directly from vinyl, since the masters had been lost.
by Andrew Rieger, December 2000

I had already posted this one a long time ago, but it's one of my favorite albums, and I noticed that because I have been really busy doing some paintings and other illustrations that it has been over a month since my last post... So quick FLAC post to let you know i'm still around! Thanks for the cool message Henry Warwick, all is well!