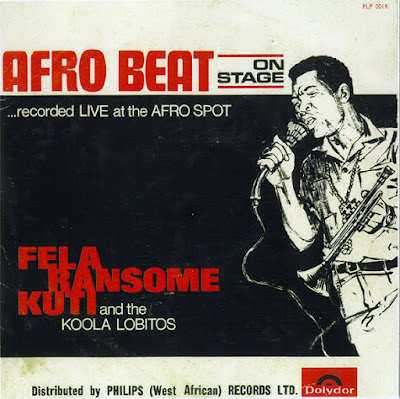 Fela Kuti is mostly known as being the man who invented Afrobeat (with assistance from Tony Allen) and for releasing more good music in the 1970s than any other single musician (from 1972-77 alone he released no fewer than 25 albums. Anyone who doesn't consider him one of the top 5 funk artists of all time probably has no idea what they're talking about, and his influence on music of all styles is totally incalculable. This isn't that Fela, though.

As a historical document, this record is indispensable. When this came out in 1966 Fela was only 27 years old and still hadn't found his original voice as an artist. He was still one hell an entertainer, though, and that's what really shows on this record. As a standalone piece of music, this is simply a really good highlife record. The first side has three lively pieces on it that are plenty of fun, and you can hear how good Fela was at working a crowd. But the real attraction is side 2.

Fela introduces the side as he and his band trying out a little Afrobeat. I can't imagine what the crowd thought he was talking about when he said it, but they seem receptive after the performance he's given on the first 3 cuts. And then they hear it: "Ako" is a long way from fully formed, but there's no way you can't hear Afrobeat in that track. I don't think the band was fully comfortable playing that style just yet but Fela sells it as best he can and the whole group continues straight into the best highlife track on the album, "Oloruka." By this point Fela is howling like a man possessed, you can hear the crowd loving it, and the band has settled in, playing looser and funkier after the stylistic experimentation. This leads straight into "Lai Se," which is another primitive version of Afrobeat, but this time the band is in a groove. It's violent, loud, free and ecstatic. Fela's trumpet soars here, and the album closes on a tribal rhythm that had to have had the crowd dancing to the last.

This is the very definition of "genius in chrysalis." "Ako" and "Lai Se" are by no means on the level of Fela's 70s Afrobeat masterpieces, but you can tell he believes in this sound and the effect is contagious. There's no way any member of the crowd could've known they were witnessing the wave of the future, but you couldn't blame them for thinking it. Do you think any of them were surprised this man became a legend?
Posted by Zen Archer at 3:01:00 AM