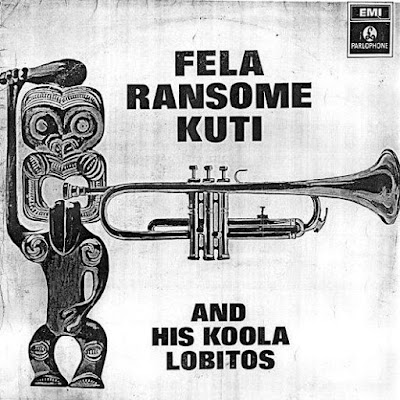 Is greatness there from day one, does it evolve or suddenly strike? Do artists in any discipline develop in steps or arrive fully-formed? How does the quotidian become exceptional?

Kuti had recorded in London in 1960 while he was studying at Trinity School of Music and two singles were issued, but it was his return to Nigeria in 1963 which kick-started the run of tracks collected here. At this point, the trumpet – which he had studied – was his instrument. The saxophone came later. Jazz was the focus: his first Nigerian band of the Sixties was the Fela Ransome-Kuti Quartet, which soon became Koola Lobitos. This was musical evolution, not the arrival of a fully-formed, original voice.

Before Afrobeat, there was Highlife-Jazz and Afro-Soul. Highlife music, originally from Ghana and widely popular across West Africa, dominated the music scene in Lagos when Fela Kuti returned to the newly independent Nigeria in 1963. Fela had been studying trumpet at Trinity College of Music in London where he met drummer Tony Allen, who also joined him in new group Koola Lobitos as they sought to mix things up by introducing the sounds they had heard in the capital's jazz clubs.

While Fela's Afrobeat compositions took the groove to its limit over side-long tunes, the first disc of early 7" singles here demonstrates the group's desire to take existing sounds and create something new, if not the extended focus and political message that would come later. The group were still developing ahead of the curve though and the abstract sounds were new to listeners in Nigeria, incorporating jazz chords into highlife arrangements.

The group's mid-60s self-titled debut album opens with 'Signature Tune', a short, sharp blast of percussion-led brass that leads into 'Highlife Time', which provides a statement of intent as Fela introduces the music that's "got the beat". You get a feel for how the group could ignite a dancefloor, as the group's highlife rhythms fuse with Fela's jazz licks on the trumpet, inspired by Charlie Parker, Miles Davis and Dizzy Gillespie. 'Ofulufe' shows a steadier side of the group, as snaky saxophone lines weave around Fela's vocals, transporting the influence of American jazz musicians back to Africa. The horn blasts around the extended dance rhythms of 'Obinrin Le (Women Are Unpredictable)' is perhaps the closest to the kind of arrangements that would be developed later.

The Koola Lobitos lineup visited the US in the late 60s and made recordings later released as The '69 Los Angeles Sessions, under the name Nigeria '70, ahead of the prolific period that followed. Around the time of this trip Fela met American black rights activist Sandra Izadore, who introduced him to the Black Panthers and revolutionary writings by Malcom X and Angela Davis that inspired his political thinking and to use his "music as weapon". Fela and Allen's musical partnership continued into the 1970s, along with another long-time collaborator, baritone saxophonist Lekan Animashaun, who had joined Koola Lobitos in 1965, as they developed their progressive musical vision in the form of a new music – the Afrobeat sound.
Posted by Zen Archer at 2:51:00 AM