Fela Ransome-Kuti And The Africa '70
1973
Gentleman 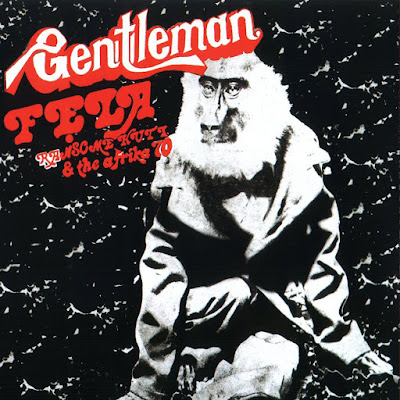 The title track of this excellent album has often been hailed as Fela’s masterpiece. Musically innovative, melodically addictive, Fela got it all right in this politically scathing song in which he opposes Westernization and those who imitate Western ways. “I no be gentleman at all,” Fela sings, and then goes on to detail the ways in which he’s a “true African original”, and therefore superior to those who wear three-piece suits and hold tight to their colonial mentality.

Fela follows this track with Fefe Na Efe, which derives its name from an Ashanti proverb describing the beauty of a woman holding her breasts as she runs. Fela, who had many Ghanaian fans (and more than a few Ghanaian wives and girlfriends), sings this lush track as a tribute to Ghana, a country he loved.

Finally, “Igbe” again shows the artist breaking cultural taboos by singing literally and figuratively about “shit”, as the word translates to, describing those friends who may betray you.

The title song takes me back to a moment in time that was very important for me. It was when I began to go out to the clubs. Since the early and mid-seventies were a harvest time for black music, I naturally gravitated towards the clubs that played black music. It was also a time when a lot of young Africans came to Germany to study or to flee from the revolutionary turmoil that had been going on in many countries there. I was in my puberty, and hanging out in those clubs was an act of initiation. I remember I became friends with some guys from Cameroon who I used to go out with, or I'd visit them at their shared apartments. Those guys eventually took me to the club where I would soon start to DJ myself. There they played Gentleman, too, and also lots of Fela other records.

Whenever I listen to the title song of this LP, it takes me back to those days. I start moving immediately. I see the dim-lit clubs, the packed dance floor with people from all over the world, half of them stoned, everybody moving to the hypnotic groove. I always thought Gentleman is one of Fela's best tracks. That's because of the ingenious beat, that fat bass line and really the entire band, and the fact that most of its 14+ minutes is instrumental, and the solos are also great.

Gentleman is one of his absolute best songs, and dare I say, has the best horn hook of any Fela song. Like many other Fela songs, it has an extended intro and then the bass comes in and you're hit with an unstoppable groove. The second half of the song has some of Fela's best call-and-response and some clever lyrics on colonialism in Africa. Let a KKK member listen to this song and I guarantee you he'd be singing along "I be Africa man original" by the end of it.
Posted by Zen Archer at 6:34:00 PM