Fela Ransome-Kuti And The Africa '70
1972
Afrodisiac 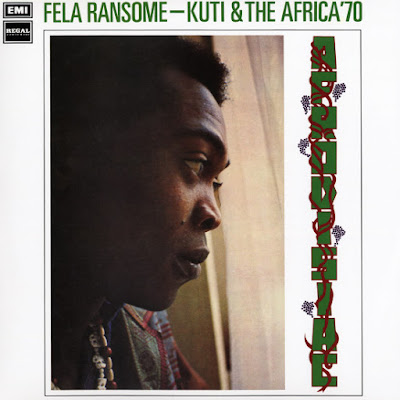 The collection of songs making up the album title AFRODISIAC were songs Fela and the Nigeria 70 (Later Africa 70) re-recorded at the EMI studio, Abbey Road London, in 1971. Originally recorded and released in Nigeria on 45rpm, they were Fela’s first successive hits in the Nigerian music charts.

Alu Jon Jonki Jon: The first song in the collection is a traditional moonlight tale, made into a song. Yoruba mythology makes constant references to inter-reaction between the human and the animal world—a CO-habitation between the two worlds. Once there was a great famine that ravaged the entire world, so goes the tale. To survive this famine, all animals agreed to sacrifice their mothers in the collective cooking-pot. When it came to the turn of the dog, the other animals discovered that he had secretly hidden away his mother in heaven. Alu Jon Jon Ki Jon, the other animals chorused after the dog, treating him as a selfish and dishonest comrade.

Jeun Ko Ku (Chop’n Quench): This piece was Fela’s first musical success in Nigeria. It paved the way for his eventual popularity throughout Africa. Within six months of its release, this track sold more than two hundred thousand copies—a reason why it remains one of the most exploited(instrumental/vocal versions) of Fela’s repertoires. Jen Ko Ku is about a glutton—who eats himself to death.

Eko Ile: is about the popular adage: ‘no place like home’. Eko is the traditional name for Lagos City, before the Portuguese renamed it Lagos.

Je’nwi Temi (Don’t Gag Me): is the first of Fela’s attacks at the Nigeria ‘powers that be’. A strong message that he is not one to be gagged. Sung in Yoruba language, it says: …’even if you jail me? You cannot shut my mouth! I will open my mouth like basket! You cannot shut my mouth!’. He goes on to stress that the truth is bitter, but it remains what it is – the TRUTH. Hence, he will not stop talking and singing about the truth.

Afrodisiac has a character to me that seems like the middle ground between Kuti's raw late 60s sound and his more polished post-Roforofo Fight output.  To me, the funkiest track is Eko Ile, the side two opener which also happens to be the shortest track on the album.  The sheer number of tracks make it seem like a tip of the hat to the days of the London scene.  After the Gentleman album, Fela would rely on the one or two song format almost exclusively through his career.  Eko Ile has a bounce to it which I appreciate, but I also dig the overdriven organ sound that Kuti gets by the close of the first track.  All things considered this is another consistent Kuti album that fits along well with the albums that surround it, which are arguably the best of his career

God damn this rocks.  Fela makes indescribably funky music without really sounding anything at all like the American music we traditionally think of as funk, and yet any of the four tracks here could sit comfortably on a mix next to Parliament or Sly Stone.  Absolutely amazing.
Posted by Zen Archer at 6:25:00 PM