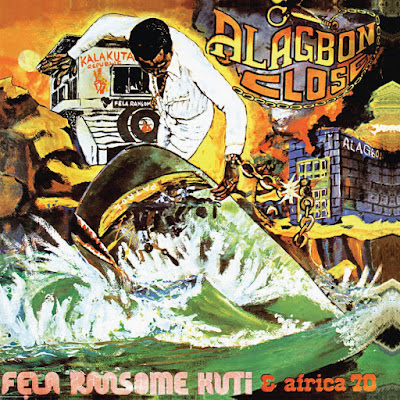 Fela wrote the track Alagabon Close to lampoon the police after he was detained at the police station which, not coincidentally, is located in a cul de sac of the same name. In this deeply anti-establishment song, Fela describes the harsh tactics that the police employ to control society, detailing their favoritism of the wealthy elite and their mistreatment of the poor. In Alagbon Close, Fela tells us, you can be detained indefinitely, you will be brutalized, you will be treated as an animal — the police have no respect for human beings. The song represents one of the first times anyone had directly taken on the Nigerian authorities in such a brash manner. “I No Get Eye For Back”, a song emanating from a lyric in “Alagbon Close”, is a more melodic, instrumentally focused piece, with Fela musing in both pidgin and Yoruba.

Released in the middle of Fela's peak, Alagbon Close is a little less structurally daring than either Gentleman or Afrodisiac, with Fela mostly riding a single groove all the way through both tracks. No matter, though - there was no one, maybe ever, writing funkier rhythms than Fela, and the fiery chanting and soloing that are the man's trademarks are in full effect. Not an essential Fela release like most of the records that surround it, but a rewarding listen nonetheless.