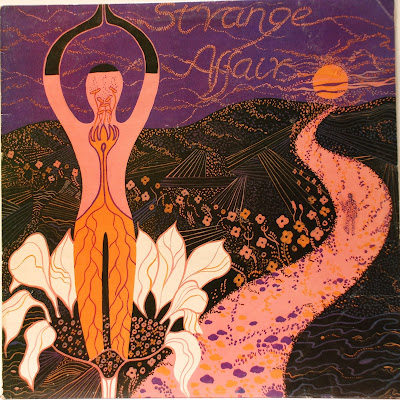 
Reissue of a rare progressive folk album from the UK, originally dating back to 1981. Expect gentle acoustic guitars, keyboards and woodwind instruments along with a sweet female voice and tasteful vocal harmonies. This was the band's sole album.

Superb and little known folky progressive rock from the very early 80’s (but sounds much earlier). Features in the Pokora book 3001 Record Collector Dreams with a massive 4 symbols on the rarity scale. Great album and very very rare!!....

The 1981 album ‘Strange affair’ by the little known band Al et Al on the small ‘Arny’s Shack’ label has become a cult album, and for good reason. This was the only album the band produced before going on to follow there ‘real’ careers. The writing of Allan Thompson is excellent, with great contemporary folk music and a mix of melancholy and humour in the lyrics – I suspect that he went on to become a psychiatrist, as the whole group seem to have been at Southampton University in 1981 when the album was produced.Reuben Ayres (keyboards) is now a consultant Gastroenterologist (shame), while James Acheson (flute, recorder, whistle and squeeze-box) is a Neuro-Opthalmologist., Martin Hewitt (Acoustic guitar) is a paediatrician. Rosie Hamilton was the female vocalist acting as a foil to Thompson, but I can find no trace of where she moved on to. The album is first class, with a variety of styles with Rosie excelling on the title track, with great keyboards from Reuben and the haunting ‘Faerie Queen’ with the vocal duelling between Rosie and Allan being a more traditional folk song. The more upbeat ‘Have you been good?’ is extremely funny – you can see why Allan went into psychiatry.  ‘G.O.D.’ is a skit on the Grand Ole Duke (G.O.D.) of York and is great fun. Side 2 starts with the slow contemporary folk song ‘Sophistication wild’, followed by the delicate ‘our love’ with Rosie taking centre stage on vocals. A complete change of mood follows with the Chas & Dave ish ‘Stick yer boot in’ with a studentish jibe at the boys in blue. ‘I want to fly’ has James Acheson (recorder) and Rosie Hamilton at their best and some great guitar work. ‘Thank you Sue’ is a folksy love song, with a bit of humour. ‘I need time’ is one of the best tracks on the album,  with a great duet from Allan and Rosie and fab keyboards in the background from Reuben. The final track ‘Songs of Middle Age’ sees a return to the G.O.D. with Allan poking fun at some of the characters leading the University in a Viv Stanshall style. I must also give credit to the fantastic artwork on the cover (possibly one of the best covers ever) which was done by Jill Cassidy