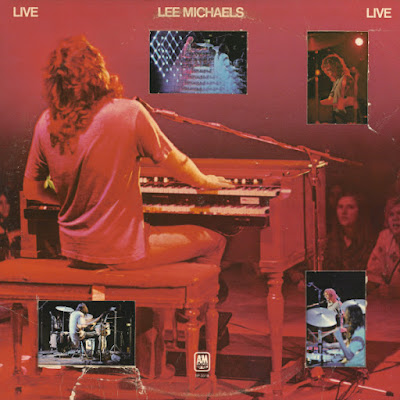 Recorded in concert accompanied by drummer Keith Knudsen, Lee Michaels goes through mostly extended versions of various songs from five of his first six albums, interspersed with numbers unique to his concerts, such as "My Lady." Oddly enough, Michaels doesn't perform his biggest hit, "Do You Know What I Mean," preferring numbers such as "Oak Fire" and "Rock Me Baby" from the same album. This is an honest presentation of a Lee Michaels concert, with a raw, un-retouched sound, and he is in excellent form, instrumentally and vocally, on numbers like "Hold on to Freedom," "Stormy Monday," and most of the rest of this album. It might not be the best way to start listening to him, however; Recital and the self-titled third album are better in that connection. Lee Michaels Live is a heavy dose of Michaels' brand of bluesy, R&B-based rock, and while he does coax a nice range of sound out of his two-instrument combo, ultimately it lacks some of the variety found on his early studio albums, which also had more of a psychedelic feel than is to be found here. Ironically, the six-minute Keith Knudson drum solo, more than anything in Michaels' own performance, is the one artifact that dates this album.

By the time of the release of: "Lee Michaels Live" in 1973, this musician was indeed well known in the San Francisco Bay Area. Lee, migrated from the central valley of California to San Francisco in the mid-sixties, and very quickly became known as: "The B3 Beast" By the end of that decade, Lee was a headliner on two coasts {Lee, was the headlining act at the Fillmore East in 1971 when Humble Pie recorded their: "Rockin' The Fillmore" LP}.

By the early seventies the Lee Michaels Band consisted of Lee on Hammond Organ and a massive drumming army named Frosty. And at the time of this live recording Lee had five albums under his belt and was as popular as Steve Miller {Pre:"Joker"} His white soul was a force to witness in concert and with Frosty on his left side facing him these two men seemed to be having a duel on stage, and enjoying every second of it!

Well, for some reason, this 1973 record is without Frosty, and as Keith Knudsen, {a later member of the Doobie Brothers} is a fine drummer it was Frosty who was the 'Yang' to Lee's 'Ying', and without him: "Live" is the begining of the end.

This album is a fine document of Lee Michaels in concert, and with "Heighty Hi" "Stormy Monday" "Forty Reasons" and "Day Of Change" it is peppered with Lee's best known songs, performed with all the normal gusto in front of a very happy crowd. The sound is much like the double LP that I purchased in 1973, it isn't great, and this album does not seem to be tweaked or sweetened from those original tapes. For the spoiled sound children of the digital age, the sound may indeed be a problem but, records of the seventies DID sound like this so for old geezers it's quite nice. The real issue is this: Lee Michaels is all but forgotten today and few remember his greatness 45 Years on And that, is the real crime!

This was a record that meant a lot to me in the early seventies, and as it was always a pleasure to see Lee play live in San Francisco, he would all but disappear soon after this record was in the shops. This is a Great album, it is too bad that just a very few of us are left to remember the great Lee Michaels, and enjoy this fantastic music.

This album is a direct reminder of an era, that we will never be a part of again.
Thank You, Lee, Frosty & Keith.
Posted by Zen Archer at 12:31:00 PM