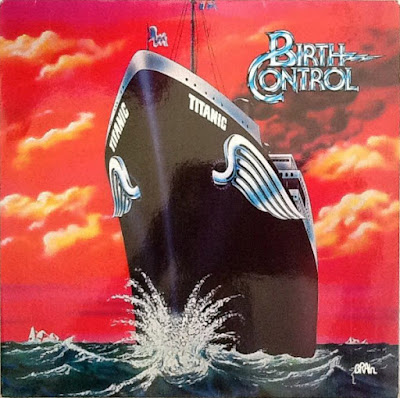 Recorded and mixed May, June and July 1978 at "Studio am Dom" Cologne

Birth Control are a German rock band that mix Hammond organ driven hard rock, with R&B, jazz and even psychedelic flavours. Fronted by the charismatic Bernd Noske, the band has always performed with great energy with a sound that constantly evolved. After a run of three albums which began with 1973's `Rebirth' that saw them embrace progressive rock, the band soon began to change their sound again, more than likely to do with the changing music tastes of the time. Funk and blues elements that had begun to emerge on their previous album `Increase' completely takes over on 1978's `Titanic', and it will likely test the patience of the more casual fans of the band. But if you just think they're a great rock band overall, chances are you'll find something on `Titanic' to enjoy.
Make peace with it right away - pretty much most of the tracks are powered by funky grooves and up-tempo energy, all crafted to very accessible verse-chorus arrangements. Catchy opener `The Last Survivor' actually has nothing to do with the `Titanic' of the album title, instead it's a cool groover with a biting lyric about a past love delivered with a raging vocal from Bernd. Right from the start, Horst Stachelhaus' bass pulses along the background nice and thick, and he instantly lifts the entire album. `Miss Davina' is a slinking chill-out that could almost be a tougher Roxy Music number, listen out for the droning chorus and cute synth trills. Slab thick bass and a howling vocal tear through `Seems Like Confusion', then Bernd is in loved-up form on the ballad `How Can I Live?'. It's the longest track on the album, confidently and sweetly sung, and a real showcase for Bruno Frenzel with his lovely heartfelt bluesy guitar soloing throughout.

The title track opens the second side, and it's a bit of a Birth Control classic, a brooding rocker with a catchy chorus, Hammond organ ripples and constant slow-burn bluesy wailing guitar fills. Be sure to check out the even better live version that appears on Birth Control's album `Live '79'! `Love Light' is a bass heavy sultry grooving dance-floor grinder, with a lusty vocal and dancing Hammond run in the finale, but the chorus is wretched and a bit too cute! `Don't Turn Back' is another classy romantic power ballad with powerful bluesy guitar runs and a warm swooning vocal especially strong in the stirring chorus, before the band close on the relentless chunky bass, lively drumming and fiery scorching electric guitar rager `Saturday Special'.

`Titanic' is a very well performed and catchy undemanding mix of rock and funk, with a handful of killer tracks and a few other worthwhile moments, with nothing actually terrible. First listen will be a bit of a shock, but give it more than one chance and take the time to listen closer, as you'll at least discover plenty of great playing from a talented band. Those only interested in their more progressive-related releases should stay well away, but anyone who likes the different styles of the band should look into it. Just make sure to check out their albums like `Operation', `Hoodoo Man', `Plastic People' and `Backdoor Possibilities' first!
Posted by Zen Archer at 5:11:00 PM