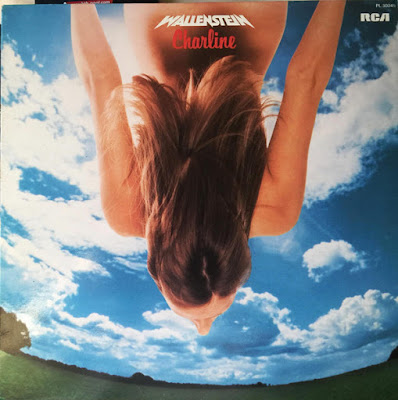 
Charline is the first record by great Symphonic Prog band Wallenstein that isn't really progressive, it is pop-rock, but hold on, it should not really be condemned because of that, as it is one of the best pop-rock records to be released by any group in the whole seventies decade.
While many progressive groups were starting to record some pretty cringe-worthy pop by this point in the seventies (1978), there is nothing to cringe at with Charline. The title song made it to 17 in the German charts at the time, though really should have been a hit, worldwide, as it is both very pretty and catchy .

I think one of the main reasons that this record is seventies pop-rock at it's best is the presence of German singer Kim Merz, who does such a fabulous job of singing on all the tracks on Charline, his first record with Wallenstein. He has a truly great voice, with a strong delivery, though never loosing a melodious, naturally musical phrasing. (Mr. Merz turned 60 years old just recently, Happy Birthday, Kim!)

The whole band at this point were still a live act to be reckoned with, as judging by the videos where they are doing the title track of Charline that exist. No, this is not the Wallenstein of the past, but Charline is much better than the following album Blue Eyed Boys, which i am sorry to say is a bit cringe-worthy in places.

The tasteful singing and playing all the way through Charine is quite a pleasing thing to hear, and when i want something a bit lighter, this album is a nice experience.
Posted by Zen Archer at 4:14:00 PM