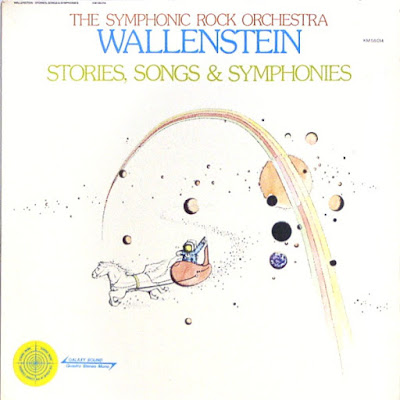 Wallenstein's fourth and last truly Progressive album may not be the best introduction to old style Classical Rock for anyone not accustomed to the clichés of the early 1970s. Modern listeners are cautioned to approach it as they would any antique museum piece, forgiving the now dated splendor and occasional histrionic overkill to better appreciate the age and rarity of the artifact itself.
You'll have to also overlook some of the most awkward and embarrassing amateur cover art ever forced on an undemanding public, and the best of luck. I don't know what's worse: the cosmic Santa Claus (or whatever he is) piloting his astral sled across a rainbow-strewn galaxy, or the piano bursting with hallucinogenic flowers and mushrooms.

It's a shame, because the music itself measures up to anything else being produced at the time, in Germany or elsewhere, although the unsympathetic production doesn't do it any favors, rendering what might have originally been full-blooded performances into thin, toothless facsimiles. Odd how the group's fourth album, in 1975, should sound so primitive compared to their debut, produced in the dark ages of studio sophistication circa 1971.

This was certainly the most overtly orchestral effort yet by Jürgen Dollase and company, as befits a band that liked to call itself (to their eternal shame) "The Symphonic Rock Orchestra". Dollase's vocals are, as always, an acquired taste, but his hand at the grand piano is strong and sure, without any of the empty pyrotechnics practiced by other keyboard wizards at the time. Joachim Reiser's violin is more conspicuous than before, and guitarist Bill Barone is even allowed a few understated jams, notably in the long middle section of the title track.

The music, unlike the group's earlier efforts, is entirely upbeat and optimistic, which of course will date it badly to jaded post-modern ears. The album even opens with something approaching an unapologetic pop song ("The Priestess"), which never fails to put a smile on my face, even with the (deliberately?) dopey lyrics.

It's not essential listening by any stretch of even the most open-minded imagination, but the album is something more than just a guilty pleasure or a rose-colored stroll down memory lane. And even such a small part of our collective Prog heritage is worth preserving, isn't it?
Posted by Zen Archer at 4:03:00 PM