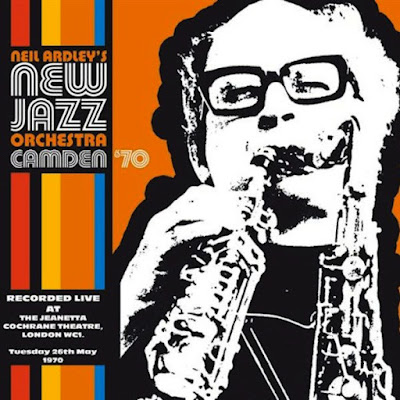 Recorded live at the Jeanetta Cochrane Theatre, London, WC1. Tuesday 26th May 1970.
During the Camden Festival.

The New Jazz Orchestra (a.k.a. NJO) led by composer / arranger Neil Ardley was Britain’s most prestigious and adventurous big band in the 1960s. Under Ardley’s visionary leadership the band developed the foundations for the modern European Jazz big band sound. Although incorporating the classic American big band tradition of Duke Ellington and the more modern approach of Gil Evans, Ardley managed to steer his band into uncharted territory, using his unique approach to instrumentation and bold arrangements. At the time this album was recorded live at London’s Camden Jazz Festival in May of 1970, Ardley was already moving rapidly towards the exploding Jazz-Rock Fusion genre, creating one of the first, and magnificent at that, examples of Jazz-Rock Fusion big band. Compared to American bands at the time, like Blood, Sweat & Tears or Chicago, Ardley’s approach is definitely much more refined and orchestral and uses a wider arsenal of the Jazz vocabulary, being therefore much more sophisticated. Having at his disposal some of the best British Jazz musicians (and then also Jazz-Rock Fusion musicians) he was able to turn the NJO into a “mean” and powerful Jazz-Rock Fusion ensemble, which truly fuses Jazz and Rock to the max. This of course brings us the players and more specifically to the fact that this version of NJO incorporates in its midst the entire lineup of one of the greatest British Jazz-Rock groups, Colosseum. Dick Heckstall-Smith (saxophone), Clem Clempson (guitar), Dave Greenslade (keyboards), Tony Reeves (bass) and Jon Hiseman (drums) all play here, and even a couple of tracks the band recorded on their albums are present, in a big band arrangement of course. With the members of Colosseum as a core of the band and with other notable players like Henry Lowther and Harry Beckett (trumpet), Dave Gelly and Barbara Thompson (saxophone) and even an ultra-rare appearance of Michael Gibbs on trombone, this is truly a superb group, able to face any challenge Ardley’s arrangements may present them with. BTW the presence of the Colosseum members is not incidental, as both Reeves and Hiseman were NJO’s founding members and Heckstall-Smith appeared on the NJO’s second album entitled “Le Dejeuner Sur L`Herbe”. Seven of the tracks present on that album are also included here, which turns this recording into an updated live version of that timeless classic. The original recording tape of this concert had quite a few technical problems, but was painstakingly and beautifully restored to life with an exceptional sound quality considering the circumstances under which it was recorded. One should be truly grateful to the producer of this immensely important historical material for making it available to us, the fans of NJO, Colosseum and British Jazz in general. This is indispensable legacy of the period and a must to any follower of British Jazz music.
Posted by Zen Archer at 4:22:00 PM