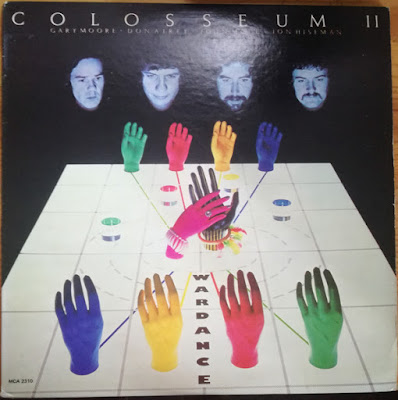 Third and last album from Colosseum II (and yet hardly the weakest) with an unchanged line-up compared with ES, released the same year on the same label and a strange goofy house-cleaning glove dance artwork, Wardance closes Hiseman's forays into rock territory, as he will concentrate on jazz in the future.
Unleashing the beast inside the Colosseum, it enters a frenzy Wardance that's intricate and complex enough to Return To forever and buy the Brand X. Moore and Airey combine lead lines that could be slightly reminiscent of the Eleventh House or Isotope as well. The aptly-titled Major Keys plays with all kinds of them in a ultra funky mode, somewhere between Yes and GG. The following amusing wink to ES' Put It This Way now tells you otherwise, but the two tracks are fairly close to each other. One of the saddest things to see is that the group still resorted to having sung tracks, this time the awful Castles, and furthermore atrociously sung by Gary Moore (ES' Rivers was much better, partly because it was less cheesy, but Gary wasn't laughable there)

On the flipside, Fighting Talk is another typical hard-fusion track that were becoming Colosseum II's specialty and the two frontmen engage in a war of note exchanges and solos abound, while Hiseman keeps them hot and ready with his intense drumming. Actually his drumming is so tense, that it becomes a little too much for the music and certainly more so to unaccustomed ears and even if it fits the Spanish dramatic track called The Inquisition, one can't help but thinking that we're close to useless show of virtuosity: As Miles once said: "Why play so many notes?..... Just play the good ones". This is not to say that there are bad notes in Col II's music, but a lot of them are effectively probably not necessary, but nevertheless they're not wasted either. The spacey trilogy of Star Maiden/Quasar is definitely another Intergalactic Slut, but it's got its charms as do most (but not all) sluts. The three chapters are divided by space winds, and most likely written in the Mole/Moore/Airey order. Obviously the group sort of knew this was their last album and decided to go out on a BANG, with the aptly titled Last Exit, starting out slowly on Mole's bass growls over Hiseman's last triumphant tom bangings, but soon growing increasingly tense with dramatic Moore guitar solos and Airey synth underrlines and the endless crescendo finally stopped by... A fade-out.. if you can believe it!!!!!