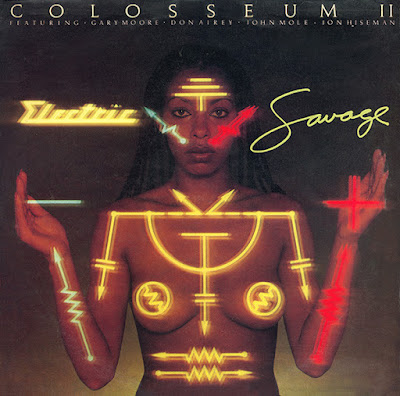 Two small changes in Colosseum II's second album: Neil Murray left the group to join National Health (I believe), replaced by unknown John Mole, and most important the group became an almost-instrumental beast, which for their kind of music fit them best. If I say Almost-instrumental, it's because Gary Moore sings on one track, sounding a bit like Steve Winwood, but let's face it, Colosseum II doesn't need a singer!! Coming with a bizarre electronic tribal neon artwork, Electric Savage heads further into RTF and Brand X fusion than ever before. If most of the music is still penned by Gary Moore, there is a tendency towards more democracy as Airey pens two himself, while Hiseman co-writes four.
Opening on Hackett-ian (solo) guitar lines, Put It This Way dives head first hard fusion filled with power riffs, Brand X-style. All Skin & Bone is a fantastic percussive track that uses the same Hackett-ian guitar and probably the album's highlight. Rivers is the only sung track of the album, and as mentioned above, it sounds like a Steve Winwood solo track. The group also had a more progressive slant and here The Scorch is the prime example of it, where the group moves through a series of rhythm pattern and moods, but mostly doing so in a fury, as would indicate the title. Very classical exit of this track and a brilliant quartet, especially Hiseman.

The flipside starts on the cheesy Lament, but it's not an over-ripe camembert, either, just a slightly pompous facet of their prog moods, a bit the logical continuation of Scorch. Next up, Desperado returns to the 100 MPH fusion of Brand X that we'd visited in the album opener. The album closes on two Airey compositions, the first is a great crescendoing airy (pun intended) track, where Don & Gary exchange wild leads on a mid-tempo and background synth layers, while its alter ego Intergalactic Strut shines among a thousand galaxy, hinting at RTF's seventh. If I say shine, there is a slight eclipse with

While it was not so obvious on SNF, Moore has more problems being himself on such a blatant jazz rock album, than he does on a blues or hard rock album, and here , he's more credible when either crunching riffs away or pulling blues wails from his axe, than really adding a jazzy blue note. When he does try, he seems either taken by Hackett or goes purelt classical. Incidentally.  Outside a few loonies (like Mooney), Hiseman's drumming is still miles ahead of many of his English peers (Bruford, Collins & Dunbar excepted) and he mixes himself a tad higher in the group's overall sound, but it's nothing shocking, on the contrary.. It even enhances his insane playing.
Posted by Zen Archer at 10:26:00 PM