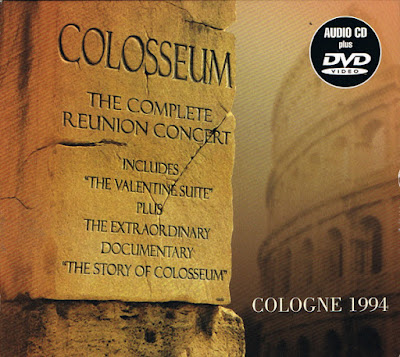 As befitting a band named Colosseum, this DVD is genuinely colossal in length. It includes not just a 1994 German reunion concert that itself lasts nearly two hours, but also a full 90-minute documentary of the band that was produced around the same time. It's certainly a good value, then, although both segments of the disc have good and bad points. Starting with the better aspects of the concert portion, the filming and audio are quite good and professional. The audience and venue -- at least in the eyes of American viewers who are ignorant of the devotion of some of the band's European following -- are surprisingly large, so much so that you find yourself wondering whether Colosseum really were that much bigger in Germany than the U.S. Plus, the band -- with all six original members aboard from its final early-'70s lineup, including singer Chris Farlowe -- plays well, sounding much the same as it did in its original incarnation (and Dave Greenslade, thankfully, primarily relies on the Hammond organ rather than more modern synthetic keyboards). The 14-song set includes several of the most popular numbers from their vintage albums, like "Those About to Die," "Walking in the Park," and the three-part "The Valentyne Suite," as well as covers of the Jack Bruce-Pete Brown compositions "Rope Ladder to the Moon" and "Theme for an Imaginary Western." Still, the songs, and especially the solos, tend to go on waaay too long, particularly Jon Hiseman's drum solo in "Solo Colonia." Heckstall-Smith's saxophone soloing in "Tanglewood '63" is more welcome, if only because sax solos are so much less common in rock concerts than guitar and drum spotlights.

The 90-minute documentary The Story of Colosseum is the more interesting section of the DVD, covering the band's career in reasonable depth and detail. Filmed in the mid-'90s, the first few minutes come perilously close to being an infomercial for the reunion, but it does promptly settle down into a conventional documentary format focusing on their 1968-1971 heyday. Everyone from the original Colosseum lineups -- including two early ones that didn't take part in the reunion, guitarist James Litherland and bassist Tony Reeves -- is interviewed, as well as management and record company figures. A few vintage clips (though it would have been nice to see more) from the late '60s and early '70s are seen, and these frankly display a certain vigor not present in the footage of the reunited lineup, as accomplished as that aggregation is. Also seen is some amateur movie footage taken of the band during its tours by Hiseman himself, as well as some scenes of the band working on a mid-'90s reunion studio album. It's just as professionally filmed and smoothly edited as the concert segment, and the combination of the two sections onto one DVD should ensure that any serious Colosseum fan finds something of note here.

This one of those DVDs where everything comes together in a perfect package. The main feature is the complete reunion concert of Colosseum when they played in Germany in 1994. They kick off with "Those About To Die" and play many of their most well known pieces, such as "The Valentyne Suite". It is strange to think that it was some twenty years since they had last been together ? it is as if they had never been away. As a unit the band are incredibly tight, and produce music that is extremely complex with enough time changes and note density to please even the most unconvinced prog head. Add to that the power and presence of Chris Farlowe, who proves that he is still a vocalist to be reckoned with, and this concert is a joy from start to finish.