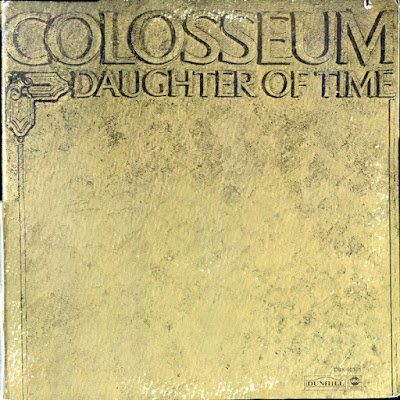 With their previous album a resounding success (artistically certainly and commercially also), but touring constantly, the line-up change seeing the two guitars of the group disappearing, being replaced by a more fitting (not necessarily more virtuoso) duo, there was no clear cut singer. Dave Greenslade then remembered his old Thunderbird days, where he was backing one of the best and strongest soul voices (along with Traffic's Stevie Winwood) Chris Farlowe, and in a surprising and daring move offered him the job. An incredibly bold choice as Farlowe's impressive stature (the man is tall but also had survived a polio attack, but deforming his body) was not really an obvious frontman candidate. Farlowe's soulful voice was not that evident either to fit the group, but again the magic that had operated for the first line-up worked but at a cost: the songwriting. Bringing such a forceful singer as Farlowe in but to use him as little as there were vocals in the first two albums was of course impossible. So the main difference between this album and the previous two, is that there is a lot more singing. And as incredible as Farlowe's voice is, it is not to everyone's taste either, but no-one can claim that there are not some incredibly spine-tingling moments on this album and that they are mostly due to his voice. So now, Colosseum is a sextet!!
Right from the opening track, you can feel that the exuberance of the first two albums will be much absent, but not the solemnity. Greenslade's organ is mixed much lower than previously, but still well present and countering Farlowe's incredible vocal soaring leaps. The following Time Lament has a difficult start, but once it gets settled, Farlowe's howling, answered by DH-S's sax lines (he was almost absent in the opener) are pushing the track into an impressive progression (but it does need repetitive listenings to fully dig it). Doomsday is a much less impressive piano-led track, even if the lyrics should please the more Tolkien-esque appetites, and a rare flute (Barbara Thompson who gets in many sax parts also and future Mrs Hiseman) appears. Clearly Clempson (the singer on this track) is not at ease with lead singing, though. The rather short title track is slow in starting and takes it time before Farlowe pulls in another one of his tricks, but again his voice sort of dominates the rest of the players. Assuredly the mixing and engineering of the album could've been bettered at the time, and the remastering job has not brought the expected results (at least for this writer).

The opening salvo of side B is a Jack Bruce (Cream but also an ex-RnB colleague) and Pete Brown (the leading UK Beat poet that had links with everyone from jazz to rock) track. If Farlowe really understands what Bruce was singing and duplicates quite well, this is not one of the stronger Brown lyrics (the man had gotten us used to She Was Like A Bearded Rainbow lines ;-), but overall a cool cover of that classic track. The instrumental Bring Out Your Dead is clearly a return to old Colosseum track (Ides Of March-type) and unfortunately shows us that the integration of such a powerful voice is not an easy task: the obvious and glaring proof is here. One can recognize Louis Cennamo (Renaissance, Illusion and Steamhammer) bass lines in the track - as official bassist mark Clarke only plays on three tracks, probably due to his late arrival in the group. Downhill And Shadows is a mix and messed-up blend of again slow-starting blues with all the usual heroics from Clempson and Farlowe and the typical Clarke on bass. The last track, the cynically-titled Time Machine is not only a filler but also a throw-away drum solo (remember that the drummer is the boss in this group) recorded live, and even if the guy is clearly an ace at his instrument (the man is impressive in concert), this kind of exercise is really not my cup of tea, a fortiori even more when lasting over 8 minutes. I suspect that this is exactly the type of tracks that terminated the partnership between Vertigo and the group.

Constant touring, a shifting line-up, the lack of time to write songs (maybe even a few too ideas also), a new balance to find between the six members and maybe a lesser production, all these factors might make this album is clearly a bit of a let-down, but ultimately with repeated listenings it slowly unveils its merits.
Posted by Zen Archer at 9:12:00 PM