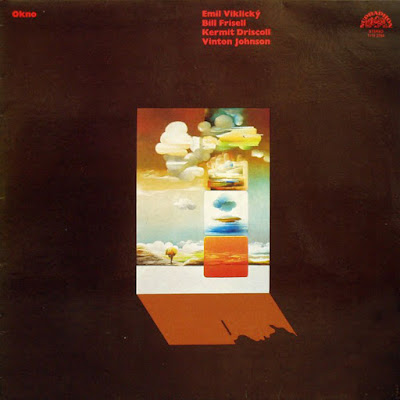 
To find Czech pianist Emil Vicklicky playing synthesisers and Fender Rhodes in a funk/fusion band alongside guitarist Bill Frisell, bassist Kermit Driscoll and drummer Vinton Johnson is less surprising when the time (1979) and the circumstances– he’d just completed a year at Berklee during which he met and jammed with Frisell in Boston – are taken into account.

Viklicky, although now justly celebrated as a masterful post-bop acoustic pianist with a penchant for Moravian folk music, also has a jazz-rock past: he played in the style with a band called Energit in the 1970s. Here, on fourteen tracks (taken from two albums, Window and Door) of Viklicky originals, plus one by Driscoll and a closer by Frisell, the quartet romps joyously through a programme of jaunty funk, very much of its time (one track even features ‘jive’ talk), but still enjoyably compelling today.

Driscoll (alternating between spurting funkiness and sonorous Jacoesque electric bass as required) and the dynamic Johnson lay down a fearsome but flexible beat, and Viklicky and Frisell fire off a series of skipping, dexterously played solos – overall, this is a relatively uncomplicated, even 'good-time’ recording redolent of a period when jazz met ‘the groove’ and simply had a good, relatively unselfconscious time doing so.
Posted by Zen Archer at 9:09:00 AM