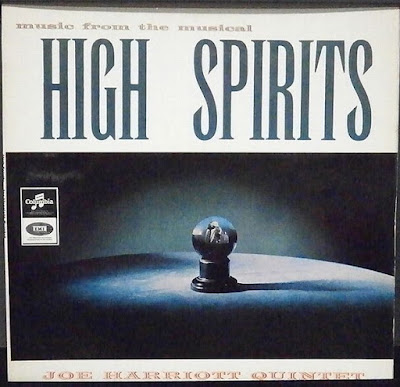 "High Spirits" is quite a surprise as it is completely "conventional", with the quintet playing modern Jazz arrangements of the themes composed for the musical show of the same name, which was being staged In UK and USA at the time. Here the listener gets the opportunity to hear Harriott, Keane and Smythe playing perfect solos, showing their respective talents. The overall performance is simply perfect in every possible meaning of the word, clearly showing that by that time European musicians could play Jazz as well as their American contemporaries, if not better.

The shortcoming of High Spirits lies in the sense that these show tunes, from the musical based on Noel Coward's play Blithe Spirit, are really fairly average West End/Broadway fare. "You'd Better Love Me" is a case in point. It really doesn't deserve Pat Smythe's elegantly poised solo. Smythe did the arrangements here and he made a more than adequate fist of the task. In fact, Smythe has the album's finest moment in his lovely, limpid performance on "Forever and a Day." The band's playing, however, is lively and authoritative throughout, and Shake Keane is on wonderful form and particularly so on "If I Gave You." There's also a certain poignancy to the way Harriott plays on each of these eight tracks, almost as if somehow he can compensate for the lack of depth to the original tunes. In any other context, his solos on "I Know Your Heart" and "Was She Prettier Than I?" would count as prime Harriott. Perhaps, this a little ungenerous.
Posted by Zen Archer at 1:15:00 PM