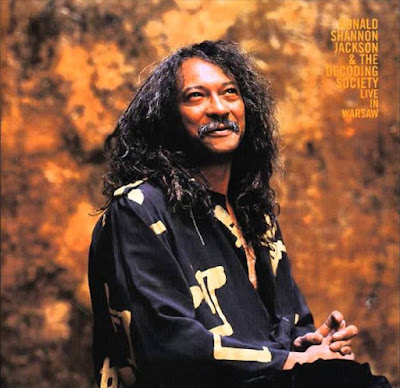 There is no questioning Ronald Shannon Jackson's abilities as a drummer and composer, although his actual albums have tended to be somewhat erratic and inconsistent. Such is the case with Live in Warsaw, a 1994 recording with James Carter on saxophones, Jef Lee Johnson on electric guitar, and Ngolle Pokossi on electric bass, although the album still has its merits. The problem lies mostly with the excess of nebulous fade-ins and inconclusive fade-outs, one or the other of which occurs on nearly every track. The actual sound quality is good for a live recording, and the performances are often inspired. "Night in Seville," which features a long coda for Johnson's flamenco-tinged guitar, does meander a bit, but the R&B-flavored opener, "Christmas Woman," and the joyous, Bo Diddley-evoking "Camaroon Wedding" are infectious. Unfortunately, the rug gets pulled out from under each of the latter tunes by the aforementioned fades, and these tracks are surrounded by some not-as-strong pieces that just don't seem to go anywhere (see the murky disco-jazz of "Opinion's" [sic]). Not until the swinging avant-blues take on Charlie Parker's "Now's the Time" and the foot-stomping reprise of "Christmas Woman" does the band really get cooking. These tracks, and Carter's honking, blues-drenched solos in particular, are likely to have listeners calling for an encore and wishing the rest of the album had been on such a high level.
Posted by Zen Archer at 12:06:00 AM