Ronald Shannon Jackson & The Decoding Society - 1980 - Eye On You

Ronald Shannon Jackson & The Decoding Society
1980
Eye On You 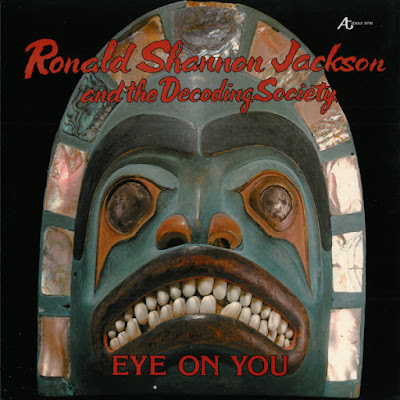 Ronald Shannon Jackson, along with Bill Laswell, John Zorn, Vernon Reid and other NYC based jazz musicians, played an important role in that movement that took jazz/rock away from formulaic post-70s 'fuzak' and re-energized the genre with a punky urban urgency and creative use of musical forms that had previously been considered outside of the jazz boundries. Jackson got his start playing with prestigous free jazz culprits such as Cecil Taylor, Albert Ayler, & most importantly, Ornette Coleman. Jackson was an original member of Coleman's highly influentuial electric jazz emsemble 'Prime Time'. It was his exposure to Coleman's harmolodic compositional technique during this period that would shape the direction of Jackson's own music.

In the late 70's Jackson began forming what would come to be known as 'The Decoding Society' which showcased influential players Vernon Reid (Living Colour) & Melvin Gibbs (Rollins Band, Power Tools). Jackson released several albums with The Decoding Society throughout the 80's, the most notable of which was the 1982 release 'Mandance', an album that was praised by critics & fans alike as a watershed in the history of jazz.

The Decoding Society was really a unique and tight group led by Ronald Shannon Jackson. Jackson was a beast of a drummer. As far as jazz drumming goes, I am most blown away by the trance inducing meta-rhythmic exercises in chaos orchestrated by drummers like Milford Graves or Rashied Ali. I also have a strong affinity for Elvin Jones. Jackson has the looseness and intensity of these drummers, but he manages to lock all of this into really heavy driving grooves. Honestly I think the rhythm section of this band would sound right at home in some sort of weird punk or avant-rock band.
The compositions are really cool. I can't help but think of prog or RIO when I hear this, but then again that music draws heavily from jazz. I'm not an authority on the taxonomy of music --
(or anything really...)
this is probably jazz. But to me it really does sound quite akin to a lot of prog. The dual saxophones and Billy Bang's violin both compliment the guitar melodies and twist into dueling cacophony that reminds me of such moments typical in avant-garde jazz, but also in no wave.
The Decoding Society really doesn't sound like any other fusion or jazz-rock group I've heard, they've really got their own funky and weird thing going on on this record -- and I really dig it! I can't say this is the most mind-blowing sound out there but it is well worth checking out, especially I think for fans of prog and weird proggy/jazzy punk which is where my head's been at lately.
Posted by Zen Archer at 1:41:00 AM