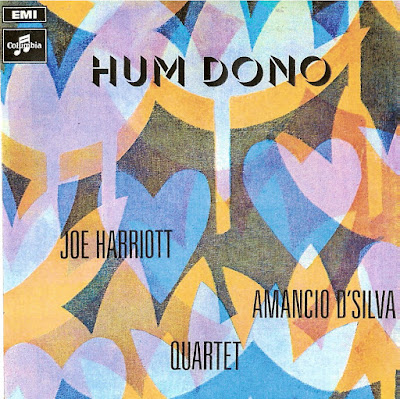 Originally released on EMI Landsdowne in 1969 and never reissued since then.

Continuing with the Harriott postings, and moving up to 1969, this was a collaboration of Joe Harriott with the Goa, India - born Amancio d'Silva. This came after the recordings with John Mayer wherein Harriott would move into "world music", long before that phrase was coined and develop his own brand of East-West fusion, using Western as well as Eastern instruments.

Here the fusion continues in perhaps a slightly more subtle fashion. D'Silva draws upon the jazz guitar tradition of Django Reinhardt, Charlie Christian and Wes Montgomery, but sneaks in aspects of the Indian vocal tradition on the title track and Norma Winstone's vocals on the opening slide effortlessly from Indian popular song styles to snatches of "My Favourite Things".

On the opening, there are Latin rhythmic inflections, on "Ballad for Goa" shades of Portuguese fado and on the closing track, what to these ears sound like a precursor of the fusion music that was to become immensely popular in the 1970s.

This is an exquisite, beautiful record. It's all very tastefully done and it swings like hell in passages. This is Harriott in yet another setting and yet again pointing ahead to what was to come. You will dig it (or else ...)
Posted by Zen Archer at 2:19:00 PM