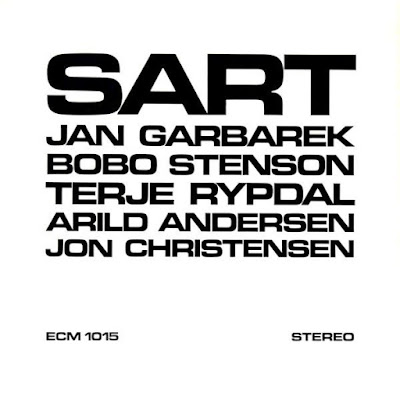 One could hardly ask for a more dynamic super group than that assembled on Sart. Garbarek’s first album of this boxed set is also his second for ECM and throbs with these young musicians’ intense desire to lay down new paths. Four of the album’s six compositions are by Garbarek. The first of these is the title cut, which takes up more than one third of the album’s total length. After an eclectic swirl of wah-pedaled guitar riffs from Terje Rypdal, Bobo Stenson’s sweeping pianism, the fluttering drums of Jon Christensen, and erratic bass lines of Arild Andersen, Garbarek’s entrance alerts us with all the import of an emergency siren. It’s an arresting beginning to an arresting album, evoking at one moment a 70s action film soundtrack and the next a clandestinely recorded late-night jam session. “Fountain Of Tears ­ Parts I & II” forges a harsher sound before swapping reed for flute. With the support of Stenson’s electric piano, Garbarek slathers on the sonority for a striking change of atmosphere. In “Song Of Space,” sax and guitar double one another almost mockingly before Rypdal hops a more intense train of thought, in the process mapping the album’s most epic terrain. Garbarek is only too happy to lend his compass. “Irr” turns Andersen’s nimble opening statement into a full-fledged narrative, along with some enjoyable adlibbing from Garbarek and Stenson. Andersen and Rypdal round out the set with respective tunes of their own. “Close Enough For Jazz” is a brief interlude for bass and reed full of unrequited desire, while “Lontano” finishes with Rypdal’s meditative, twang-ridden charm.

More expressive than melodic, per se, this is engaging free jazz that’s constantly looking for debate. Such is the sense of play through which it thrives. At times the music is so spread out that one has difficulty knowing if and when a “solo” even occurs. Regardless, Garbarek’s playing is knotted, but also carefully thought out. As in so much of his output during this period, he tends toward a sobbing, wailing quality that adds gravity to relatively airy backdrops. This is music with patience that demands just as much from the listener. It lives on the edge of its own demise, always managing to muster one final declaration before it expires.
Posted by Zen Archer at 5:37:00 PM