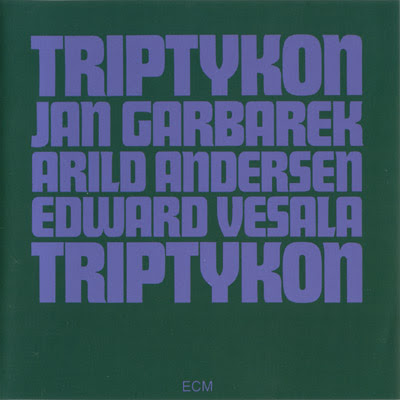 Jan Garbarek’s third album for ECM is a free, though by no means easy, trek through indeterminate territories. “Rim” breaks into light with the mournful saxophonic cries that thread the entire set. Arild Andersen dots Garbarek’s auditory cloth with almost vocal ink stains. We find Garbarek in a uniquely agitated mode, showing both great restraint and willful shifting in his performance. This is an arresting track, as sublimely depressing as it is soulful. The title denotes “frost” in Norwegian, and describes Edward Vesala’s icy percussion to a T. “Selje” (a picturesque municipality of Norway’s western coast) evokes the majestic fjords of its eponymous region, and the humble economy of its fisherfolk. Garbarek opts for the gentler flute against a thawed backdrop of bass and wind chime-like glockenspiel: a mystical aside from an otherwise forward projection.

“J.E.V.” breaks from the album’s expansive palette with a more flatly recorded sax intro. The appearance of bass and drums merely underlines the music’s hesitancy, at once assured and unaware of its future paths. “Sang” (Chant) is another subdued interlude, featuring a bass sax caught in a silken web of percussion and bass. The title track unravels like a herding song picked apart piece by piece, its remnants scattered along the base of a low mountain to the tune of an intriguing bass solo. “Etu Hei!” screeches and pounds its way into being before the Norwegian folk song “Bruremarsj” is rendered in a tense bondage of sax and bowed bass, closing with a flutter of wing beats in the final drum break.

In spite of its many abstractions, Triptykon is rife with melody and movement. It’s almost as if a distant relative were singing traditional tunes that everyone else in the family has forgotten. Though drunk with nostalgia and slurred speech, his voice is so genuine that one can hardly fault him for straying a bit off the beaten path. With repeated listenings, one begins to distinguish such thematic material from its improvised surroundings, thereby rendering any challenges this album sets before us much deeper in their returns.
Posted by Zen Archer at 5:43:00 PM