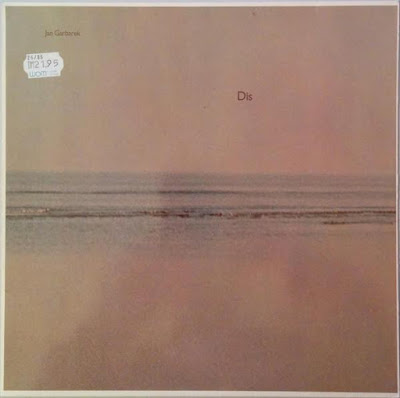 Debates over the “ECM sound” continue, though thankfully with waning fervor, in attempts to define that which never needed definition in the first place. Meanwhile, critical pundits are missing out on some spectacular music that would easily silence their concern over arbitrary categories. On Dis, his eighth album for the label, Jan Garbarek slipped off his extroverted garments and into a deep look inward. One immediately notices the windharp, one of the last instruments one might expect to hear on an album filed under “Jazz,” and which would make an ECM reappearance on Arvo Pärt’s Te Deum. The windharp anchors the album into place, appearing at its center and outer edges. Added to this are the extended soliloquies of guitarist Ralph Towner, whose unmistakable 12-string graces three of the album’s six tracks. For the rest, he casts longer shadows with nylon. Garbarek plays like a blind scribe, scoring his runes into ephemeral surfaces: water, earth, and air. Garbarek and Towner cover about as much territory as two musicians can. From the somber duet of “Krusning” (Ripple), cradled gently like a breaking tide into which footsteps are pressed and filled again with brine, to the wooden intonations of the title track, Dis enamors with its varied terrain. In the powerful “Skygger” (Shadows), Garbarek alternates between bold gestures and more unified punctuations. A brass section (Den Norske Messingsekstett) adds ceremony and locality. The guitar lifts its weary head and flutters its eyes in the glare of sunset, offering a solitary call for closure.

This album marked a formative transition for Garbarek, who wrings out here a soulful sound that is variously airborne and submerged. Comparing the cover art to his equally captivating Dansere, one is tempted to link them as a complementary pair. Where the latter is firmly planted in a wide and arid plain, Dis is downright oceanic, and questions its own division from the sky. The mystique of Dis puts me in mind of a film like Ron Fricke’s Baraka, in which words are superfluous, and melody and images reign as supreme forms of communication. We are never just listeners, but wayfarers in its deeply internal landscape, where space is no longer a viable marker of location, and only breath comes to define the presence of consciousness.
Posted by Zen Archer at 8:13:00 PM