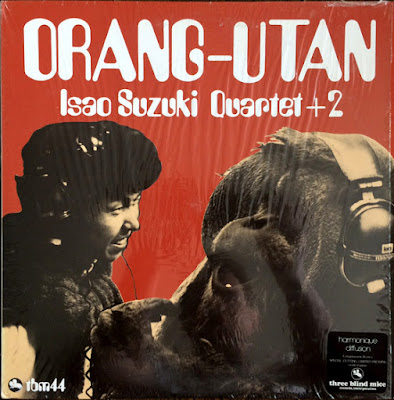 Despite being a well-regarded and sought-after slice of Japanese jazz-funk and contemporary jazz perfection, Orang-Utan has never previously been released outside of Japan. Given that original copies of the album regularly fetch three-figure sums online, this global reissue is arguably well overdue. Recorded by Japanese scene stalwarts Isao Suzuki Quartet (with the addition of two guest musicians) in April 1975, the set is topped and tailed by two long, up-tempo workouts, of which fizzing, funk-fuelled opener "Blue Road" stands out (though hardcore jazz-heads may prefer the title track). In between, you'll find two relaxed, laidback affairs where Japanese jazz-rock legend Kazume Watanabe's languid solos come to the fore.

Bassist Isao Suzuki's popularity shot up to stratosphere with the release of Blow Up from the Three Blind Mice label. By the time he recorded this, fourth album for the label, he was actually the winner of the Swing Journal Readers' Poll. And this rather strangely titled album doesn't disappoint.
Suzuki had a knack for surrounding himself with superb musicians and playing brilliant, groovy music that is firmly rooted in the jazz tradition. This time, he picked as the all-important horn player Kenji Mori whose superb playing on alto sax, bass clarinet and flute strongly remind us of Eric Dolphy. The guitar genius Kazumi Watanabe turns in wonderfully nuanced performances in every setting. Also, not insignificantly, Mari Nakamoto--one of the best female jazz vocalists Japan has ever produced--appears as a guest and sings Shirley Horn's "Where Are You Going?" with excellent results.
Posted by Zen Archer at 12:09:00 AM