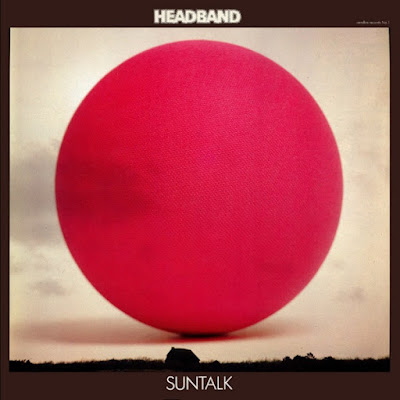 Recorded at "The Sound Experience" Studio am Dom

''Suntalk'' (1980, veraBra Records) was a much different album than Heaband's debut.Yes, it's still following a sympathetic Jazz Fusion vein, but both sides of the album are largely different, especially the 24-min. long ''Für die Sonne'' makes you wondering what this thing will turn up to be.The shorter tracks on the opening one show an increase of funky elements in guitar, bass and drum parts with the sax sounding always melodic and Michael Herting offering a varied keyboard work.Much more tropical than anything the band played on ''Straight ahead'', pretty enjoyable but not too adventurous.''Für die Sonne'' kicks off in an excellent way.It's based on an Eastern-influenced enviroment with a great and very Kraut Rock-ish steady groove, while Norbert Stein dominates the scene with his impressive sax soloing and Jan Reimer offers a raw, jazzy electric guitar performance, which reminds some of Jan Akkerman's 70's live footage.Problem is...this thing goes forever and never changes until the farewell seconds.Headband deliver here some really lovely soft Kraut Jazz, but destroyed it themselves by pushing it way too far.Anyway, a decent effort, but lacks the more consistent characteristics of their discographic entry.
Posted by Zen Archer at 10:20:00 PM