Hans Dulfer And Ritmo Naturel - 1970 - My Morning After The Third

Hans Dulfer And Ritmo Naturel
1970
My Morning After The Third 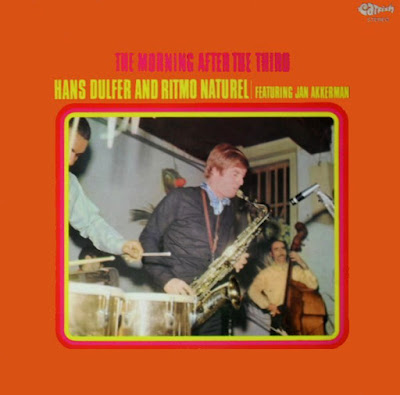 Hans Dulfer was born on 28 May 1940 in Amsterdam, Netherlands. He began at age 17 and has been referred to as "Big boy" because of his album of the same name. At the end of the sixties he and Herbert Noord (Hammond organ) founded a quartet that played saxophone/organ funk. He has done a good deal of cross-over jazz or jazz fusion and even worked with Punk rockers at one point. He has recorded an album with fellow saxophonist Frank Wright titled "El Saxofón". He has comparatively high popularity in Japan where Hyperbeat was a top-selling CD by instrumental standards. Furthermore, Japanese film maker Masaaki Yuasa stated that he listened to Hans Dulfer's music while working on Mind Game.

Hans Dulfer is the father of saxophonist Candy Dulfer and the two worked together on the album Dulfer Dulfer, whose title refers in part to Hans.

Dulfer's album is a sax laden underground jazz album with Latin percussion. The sole area of interest for rock fans is the appearance of Jan Akkerman (Focus) on the first track (of five total). Here Akkerman adds psychedelic styled guitar solos that are at complete odds with the rest of the material, but is strangely satisfying. Of note, the Dutch Catfish label was also home to Ahora Mazda and the early albums by Solution.
Posted by Zen Archer at 8:09:00 PM