Glenn Branca
1989
Symphony No. 6 (Devil Choirs at the Gates of Heaven) 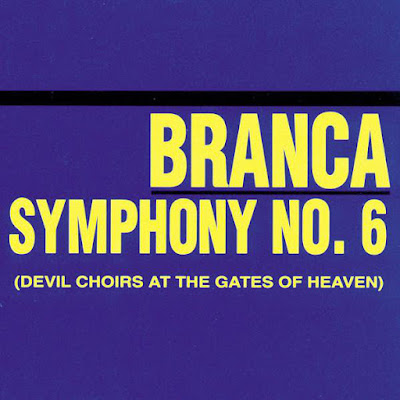 Symphony No. 6 was commissioned by The Mass. Council For The Arts New Works Program


Glenn Branca's Symphony No. 6 is as dense, edgy, and dramatic as listeners have come to expect. Symphony No. 6 isn't a symphony in the stuffy classical sense -- it's not written for a traditional orchestra, and it doesn't obviously adhere to symphonic form. Still, the use of the term "symphony" is appropriate here, since it aptly describes the grandiosity of Branca's work. This particular symphony is scored for drums, bass, keyboard, and between eight and ten guitars. The guitars are used exclusively for texture and noise, however, not melody; the guitarists use a variety of unorthodox tunings and coax unusual sounds from their instruments. The piece's five movements typically begin rather quietly, then grow into massive noise squalls, accompanied by insistent, pounding drums. Symphony No. 6, like many of Branca's works, has one foot in the late-'70s New York no wave scene that inspired Sonic Youth, and the other in the experimentalism of late-20th century composers like Iannis Xenakis. This recording may frustrate listeners who wish Branca would just join one camp or the other, but that doesn't make his work any less powerful or evocative. Branca is one of the few avant-garde composers with the nerve to subtitle his work "Devil Choirs at the Gates of Heaven," and one of even fewer whose music is discordant, engrossing, and scary enough to make the listener take such a subtitle seriously.