Glenn Branca - 1985 - Symphony No. 5 (Describing Planes of an Expanding Hypersphere)

Glenn Branca
1985
Symphony No. 5 (Describing Planes of an Expanding Hypersphere) 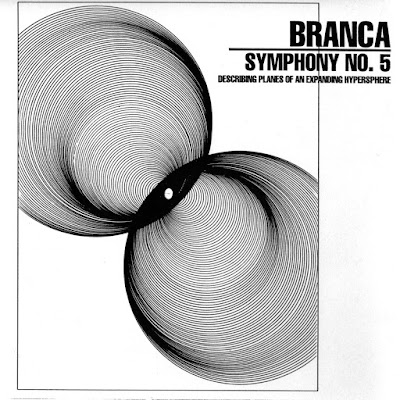 "Symphony No.5 was Commissioned by the UCLA Center For The Performing Arts."

Recordings of Branca's music cannot fail but do it an injustice. The purely visceral punch of his sound and the extreme effects that the overtones generate deep within one's ear (which can sound like a microscopic, though incredibly intense, devil's choir) are impossible to duplicate in recording media. Nonetheless, the listener can get something of a taste of its power through a recording such as the one at hand.

Though he once again includes a subtitle that is imbued with matters arcane ("Describing Planes of an Expanding Hypersphere"), Symphony No. 5 actually harkens back more to Branca's earlier rock-based compositions than to more diffuse works like Symphony No. 3. Stefan Wischerth's steady drumming, which might sound leaden in other contexts, is featured prominently here and propels the 11-piece ensemble dramatically through each movement. The final section -- filled with dense, industrial thrashings and a fractured rhythm -- breaks character somewhat, bringing the piece to an unsettling close. As with several prior works, the "guitars" in question appear to be homemade models consisting of guitar strings and pickups attached to wooden planks, laid in tiers horizontally and played with mallets or sticks. By using several different tunings (all, knowing Branca's methodology, presumably related in some obscure mathematical fashion), the chords created are both complex and ambiguous, and virtually always fascinating. If there's a complaint to be lodged with this composition, perhaps it is that it comes across more as a series of individual movements and less as a whole, organic form. But those movements offer more than enough pleasures to highly recommend the album both to Branca fans and to newcomers seeking to learn about his music.