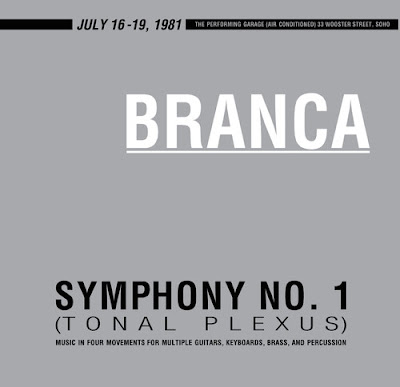 
If Beethoven,Bach, and Bartok were around in the late twentieth century, they would have used the fashionable instruments of the day,and reflected the world around them in sound? I would have loved to see what Bach could have come up with when confronted with a Modular Moog system for example. Also of course they would have had to live their lives as a 20th century person,to absorb all the influences ,sophistications and neuroses of late modern man.

It would,of course , now read as Beethoven, Bach,Bartok and Branca. A kind of Crosby,Stills, Nash and Young of the neo-classical,except without the cocaine fuelled blandness of those Laurel Canyon numpties.

Branca,is a true modern classicist,using the symbolic instrumentation of his age, electricity,guitars and the drum kit, to recreate the dissonant noise of the city. The constant drone of the traffic,the rhythmic noise of the production line, and the Doppler effect of passing sirens. There are sequences that recreate the paranoia and fear of the Cold War era in which this was written, as massed electric guitars sound like a thousand approaching planes and missiles raining warheads on a doomed civilisation; if civilisation applies to what humanity has created for itself?

Symphony Number One,is the best Branca symphony in my humble opinion,featuring all his old chums, Lee Renaldo,Thurston Moore,Barbara Ess,and Wharton Teirs. It retains the excitement of his early work, holding onto the urgency of its rock roots,without becoming indulgent,as happens in later works. Also,its Lo-Fi recording quality adds to the authenticity of genuine classical music that has its roots on the streets rather than some stuffy conservatoire in Salzburg.

Branca's first symphony is a massive behemoth of guitars, noise and alternate tunings with players that include the Theoretical Girls' Wharton Tiers and Sonic Youth's Thurston Moore and Lee Ranaldo. The first movement begins with a distant groan, like some Aboriginal folk music. By the time the thundering drums begin, the sound has become as grand and immovable is the monolith from 2001. Branca's brilliance lies in his merger of rock and roll with 20th century classical, as well as his ability to create rumbling, careening crescendos into infinity. This 1981 recording shows the roots of everything from Sonic Youth to Godspeed You Black Emperor! and Mogwai, Merzbow and the Boredoms to Black Dice and Lightning Bolt - even post rock groups like Tortoise and Sigur Ros - just listen to the ambient, repetitive pulsing of the second movement. Always defiant, always challenging, Branca's Symphony No. 1 is one of the most raucous and inspiring compositions of the late 20th century.
Posted by Zen Archer at 9:14:00 PM