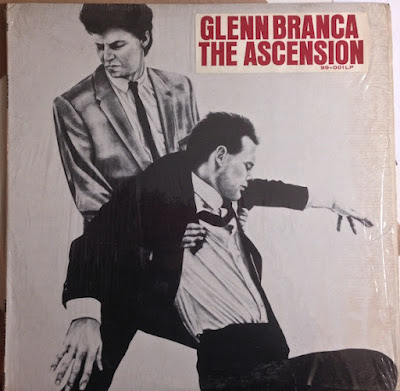 If one chooses to categorize the music on this recording as "rock," this is surely one of the greatest rock albums ever made. But there's the rub. While sporting many of the trappings of the genre -- the instrumentation (electric guitars), the rhythms, the volume, and, most certainly, the attitude -- there is much about The Ascension that doesn't fit comfortably into the standard definition of the term. Not only does the structure of the compositions appear to owe more to certain classical traditions, including Romanticism, than the rock song form, but Branca's overarching concern is with the pure sound produced, particularly of the overtones created by massed, "out of tune," excited strings and the ecstatic quality that sound can engender in the listener. Though his prior performing experience was with post-punk, no-wave groups like the Static and Theoretical Girls, it could be argued that the true source of much of the music here lies in the sonic experimentation of deep-drone pioneers like La Monte Young and Phil Niblock.

Happily, the music is accessible enough that one can jump right in, regardless of one's direction of approach. Branca's band, unlike some of his later enormous ensembles, is relatively modest (four guitars, bass guitar, and drums), so the sound is comparatively clear and each member's contributions may be easily discerned. The chiming notes that begin "The Spectacular Commodity" are allowed to hover in the air, awash in overtones, before being subsumed into a rolling groove that picks up more and more intensity as guitar chords cascade one atop another, threatening to, but never succeeding in, toppling the whole affair. "Structure" plays with sonic torque, whipsawing between two differently stressed voicings of the same theme, pulling them back and forth like taffy.

But the title track is both the consummation of the record and the surest indication of Branca's direction in later years. It begins with a marvelously dense haze of ringing guitars, feedback, and percussion, with a foreboding bassline contributing to the strong sense of disorientation. Midway through, it abruptly shifts to harsh blocks of sound over a rapid rhythm, the blocks differing in texture but played in alternating sections, smacking into each other and further heightening the tension. These disparate sounds eventually coalesce into a pure, ringing tone that, over the last minute of the piece, explodes into a spectacular cacophony, a seism of bell tones, microtonal eruptions, and near orgasmic guitar bliss. An absolutely stunning, jaw-dropping performance.

Branca's music has served as a major inspiration to many alternative rock bands that surfaced in the '80s and '90s, notably Sonic Youth; both Lee Ranaldo (who plays on this recording) and Thurston Moore were regularly members of his early ensembles. The Ascension, in addition to being an utterly superb album on its own merits, uniquely invites listening from both adventurous rock fans and aficionados of experimental electronic music. For years, the vinyl release on 99 Records, with its stunning cover illustration by Robert Longo, was a highly sought-after collector's item. It was finally issued to compact disc in 1999 by New Tone.

Abrasive. Unrelenting. Euphoric. Those are just some taglines that come to mind when thinking of the significance of Ascension. Occasionally there's select cases in my library where the less I know of an artist, or the work that came before or after, the better. There's no denying Glenn Branca will fall into that category, especially given the totality displayed on his opus. I needn't hear anything else the man has composed, as they'll likely only diminish the impact Ascension sets. It is an album that lives on its own plateau, a five-track collection of sensations cued up to the fall, or rise, of civilization. Like many works that attempt the same feat, Post-Rock being a prominent genre where you can find them, Ascension leaves the reaction to the listener. Like Godspeed You! Black Emperor's Lift Your Skinny Fists, I never know whether I'm supposed to cry from joy or defeat. Each extreme is taken and used simultaneously, and in Branca's case, swelling arrangements are created that fail to clue you in on the direction they're taking. One moment we're being lifted, the next we're being crushed. Ascension thrives because it exposes how entangled emotions really are. All this with some rather ordinary drums and guitars.

Ascension's release in 1980 serves as a marker for the future direction a handful of Rock genres would take, even though they themselves likely attributed the primal aggression to the Post-Punk scene imploding at the time. Nonetheless, artists like Swans, Sonic Youth, or GY!BE, owe a lot to the maddening creation Branca conjured up. Especially in the former's case, as Swans' entire discography, spanning four decades, separated by three clear generations, finds a common lineage in Ascension. The brutality of their early No Wave era, the beauty of their middle Gothic Rock era, the droning torment of their last Experimental Rock era. It's all here, all captured within 43 pulverizing minutes. It doesn't start like that though, as 'Lesson No. 2' introduces the LP as a sloppy mess of artsy fartsy freestyle jamming that fails to outline the oncoming exaltation. Of the five songs featured on Ascension, three exceed the eight-minute mark, and thankfully for our listening pleasure, that's where Branca's vision excels. 'Lesson No.2's' aimless dribble and 'Structure's' wedged positioning cause their moments to amount to little more than minimal mood setting and noise fodder.

However, just as the fear of 'Lesson No.2' as a 12-minute track sets in (an exact occurrence that happened multiple times on Swans' ear-curdling To Be Kind), 'The Spectacular Commodity' quells that anxiety with a momentous rise to the heavens. It's Ascension's best track, and one that's precisely defined by the title it holds. That's not instantly apparent though, as the drudge of death, the suffering of pain, the exposure of the grotesque, all necessary evils on the flight upwards. We must past the filth, endure the pain, to achieve rapture. Two-thirds of the way through and you know 'The Spectacular Commodity's' building to something, but Ascension hasn't shown us what yet. Then, a twist of fate occurs with some sublime guitar work that lingers under the intense drums. What was once dark and ominous has turned bright and hopeful, all without a single notable change in pacing. It is a sensational moment, and one that'll forever remain in my memory. All praise to Branca, he didn't just leave us with that tiny taste of glory. 'Structure,' in its fleeting state, returns us to clamor of denizens, but immediately after that 'Light Field (In Consonance)' emerges as a great ball of celestial fire. Eight unrelenting minutes of pound-for-pound joy through ravenous ecstasy. Here, we don't suffer. Here, we're given the full three-course meal at the Last Supper.

What Ascension does so well, and it's something not expressed outright, is its perception of various ways to ascend. In music circles, that's typically seen as the momentous build of power to inevitable release. Aka the Post-Rock formula. That's what 'The Spectacular Commodity' provides us with. It is the pinnacle of that approach, much like Lift Your Skinny Fist's first six minutes of reverie. However, in each instance elsewhere, ascension is achieved through various means. 'Structure' rips you from your confined body like bullets to the heart, 'Light Field' engulfs you with excessive triumphant force, 'Ascension' strips the shimmering promise leaving reality in its wake. The 13-minute title track rears the head of Totalism like no other, pressing down on the listener with increasingly vexed force. There is no light here, no hope, no assurance. That's not to say heaven's out of reach, just that following your last dying breath, the breakneck ascension to the stars will likely be filled with discordance, not harmony. Noise, scrapping by your earlobes, tearing them to shreds, sounds more likely than a string of angels coordinating a symphony for your welcome party. You are but one of billions sent to ascend. You are not special, but life is. That's what Glenn Branca shows us.
Posted by Zen Archer at 9:08:00 PM