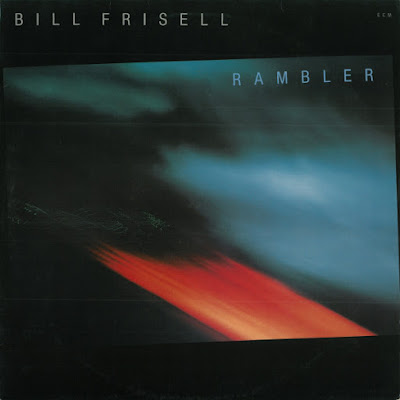 If you’re like me, then you were introduced to the prodigy of guitarist Bill Frisell through the work of John Zorn’s groundbreaking Naked City outfit. In that context, Frisell was able to stretch his skin in ways that he never has before or since. Or so I believed until I only recently began to explore his back catalogue on ECM. The summit of these early explorations is shared by 1983’s In Line and Rambler. Where the former seemed to burrow into the deepest recesses of his craft, the latter travels far and wide, not least through the presence of some fine sidemen: Kenny Wheeler on three kinds of brass, Paul Motian on drums, Jerome Harris on electric bass, and, perhaps most notably, Carla Bley band regular Bob Stewart on tuba. Stewart’s pomp is especially enlivening, teasing out as it does Frisell’s penchant for not taking himself too seriously. The tuba threads an unwavering smile through the morbid march that is “Music I Heard” and adds earth tones to the silvery palette of the title track. The latter is quintessential among Frisell’s output. The lovely webbed slink of his guitar and gorgeous Wheelerian dialogues carries us in strums and strides to an ethereal conclusion. The band also abides by humor in the hokey and lumbering “Tone.” This, the album’s opener, gives us a taste of the mesh that is Frisell’s style, one strung with long threads of algae, picked up and spun by his band mates in kind. Through the tree swing sway of “When We Go” and the tongue-in-cheekily titled “Wizard Of Odds” we encounter Frisell’s flowery side, ever enhanced by Wheeler’s squeals and stops. The campiness of “Resistor” is tempered by the welding torch of Frisell’s electric and the laser of Wheeler’s trumpet, while “Strange Meeting,” fettered by a pleasant bass line, draws itself into an incisive Synclavier sound. As vital as Frisell is to this date, one feels him most in the compositions. Wheeler and Harris are the real stars, and let us not shut our eyes to Paul Motian’s sparkling threads.

Rambler is a significant album for showing the world a remarkable guitarist on his own terms, and through a set of compositions as distinct to his sound-world as the clouds are to the sky.