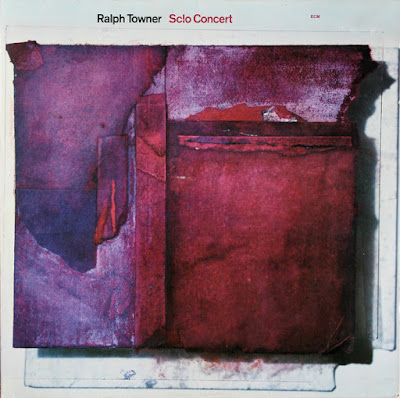 Ralph Towner’s Solo Concert holds a special place in my ECM-adoring heart, for it was my introduction to a guitarist whose skills have since become staples of my listening life. Lovingly recorded in the open concert spaces of Munich and Zurich, Solo Concert is to the guitar what Keith Jarrett’s The Köln Concert is to the piano. It’s that good.

Towner’s own compositions make up the bulk of the album. The opening “Spirit Lake” is the most transcendent of these and exemplifies Towner’s craft as both technician and melodic wellspring. Notes drip from his 12-string with shimmering lucidity, dipping below every motif it can swing from as it blossoms into a brilliant flourish of an ending. What at first seems an abstract improvisational exercise in “Train Of Thought” reveals the instrument’s hidden voices, in which a pulsing bass lingers and harmonic clusters soar. The staggered melodies and banjo-like articulations of “Zoetrope” contrast superbly with “Chelsea Courtyard,” in which dissonant arpeggios lie in the grass, above which the clouds are so thin they’re barely visible, and motivations even more so. Still, the music offers more than enough provocation as nostalgias flit by the windows of our attention, the curtains of which Towner opens to let in the light of a half-remembered day.

Towner also lays his hands on a pocketful of sparkling covers. Of these, the two by John Abercrombie—“Ralph’s Piano Waltz” and “Timeless”—are notable for their use of thumbed anchors, which provide a ghostly counterpoint to wider runs in the upper registers. Lilting syncopations trade places with jazzier throwbacks, packing melodic energy into increasingly compact cells. Yet it is with “Nardis” (Davis/Evans) that Towner truly enthralls. Played on classical guitar, it is a vivid standout that jumps headfirst into its themes before unraveling them in a blissful wave. Towner’s deft harmonies and prowess at the fingerboard leap with the precision of synchronized swimmers about to clinch a gold.

This is an intelligently assembled program of complementary music that shows the depth and breadth of Towner’s abilities more than any single disc. My only complaint is the applause that breaks the spell of every piece when it ends. Then again, I’d have done the same had I been there.

If you’ve ever wondered just how high a guitar can fly, then here’s your plane ticket.
Posted by Zen Archer at 6:20:00 PM