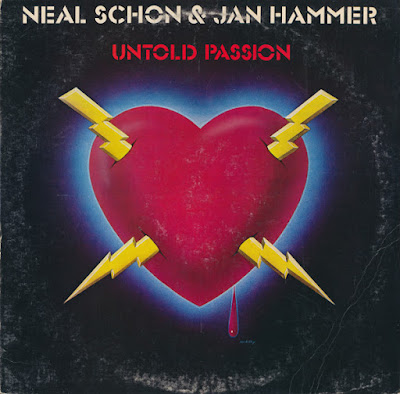 Some things are so simple it's amazing people don't think of them sooner. Over the years, some of the finest representatives of  jazz/rock fusion have had a difficult time attracting universal album radio acceptance. Examples are Al DiMeola, Jean-luc Ponty, Larry Carlton, Jeff Beck, and The Dregs, etc. As outstanding as these musicians are with their instruments, the one missing ingredient was a commercial vocal quality. Neal Schon ? Jan Hammer's Untold Passion has it, as well as all the stories, rock and roll rumors and hippie myths you’ve ever heard about Neal Schon's great guitar phrasing. Schon has been an exceptional player since he was around 15 years old; that's when Eric Clapton put the word out he was interested. Seconds later, Santana stole him away, and Neal provides all the second guitar licks on some of the finest albums from Santana's middle period. Developing with each passing day, Journey is Schon's most current association with album radio, and here he gets the chance to stretch out and uncork a high grade performance with Jan Hammer, one of the most revered musicians in all of jazz and rock. From side one The Album Network recommends "Wasting Time," and "I'm Down." On side two try "It's Allright" and "On The Beach." If you liked Jeff Beck's Wired and Blow By Blow, you'll certainly admire all of Untold Passion, a multi-colored display of outstanding musicianship.
Before Journey became one of the top pop/rock acts of the early '80s with a string of arena rock anthems and power ballads, the group had a more detectable prog and fusion edge -- while guitarist Neal Schon's earliest work was with the very un-Journey-like Carlos Santana. So at the height of Journey's popularity, it appeared as though Schon wanted to get back to his fusion roots by uniting with keyboard wizard Jan Hammer. However, the resulting album, 1981's Untold Passion, wasn't going to be confused with Mahavishnu Orchestra anytime soon -- tracks such as "I'm Talking to You" wasn't much different from Journey's melodic rock style, while "Hooked on Love" saw Schon (who also doubled as vocalist) replicate Paul Rodgers' singing style. That said, the funky keyboard/guitar duel "The Ride" gave both Schon and Hammer a chance to show off their chops. Untold Passion seems to lean toward the more melodic rock side of things, rather than finger-spraining chops.
Posted by Zen Archer at 1:37:00 AM