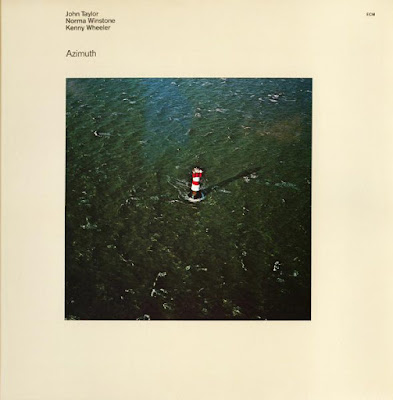 Azimuth:
1. The arc of the horizon measured clockwise from the south point, in astronomy, or from the north point, in navigation, to the point where a vertical circle through a given heavenly body intersects the horizon.
2. A group made up of vocalist Norma Winstone, husband John Taylor on keyboards, and trumpeter/fluegelhornist Kenny Wheeler whose music, measured from any point, draws an arc through countless heavenly bodies before intersecting with the enchanted listener.


The group that would become Azimuth began its journey on this self-titled album. “Siren’s Song” rests on the forgiving laurels of a repeated motif, gilded by a horn-flanked voice amid pianistic accents. Like a Steve Reich riff dropped in a pool of jazz, it treats the pulse as the animating force of its creation. Wheeler broadens Winstone’s palette in the melodic relays of “O.” The title track is buoyed by a stunningly gorgeous arpeggiator, over which Winstone sets to flight a pair of overdubbed birds. Once they have flown away, Wheeler draws between their pinpointed forms a sinuous trajectory, along which one is able to chart the album’s path with even more fluid precision. The synthetic backdrop builds in scope, turning what might otherwise be a repetitive New Age loop into an elegiac improvisational exercise. The plaintive piano introduction of “The Tunnel” extends this supportive electricity, into which Winstone begins to sow her potent words. Semantics trail off into further meanderings, reminiscent of the previous track, before the backdrop morphs into a stunning change of key. This makes “Greek Triangle,” a curious piece for brass, all the more whimsical for its appearance. Though outwardly incongruous, its breathes with the same focused spirit that animates the whole, thereby elevating it beyond the status of fanciful diversion. It also serves to refresh our palette for the lyricism of “Jacob,” in which Winstone’s braids and Wheeler’s fluid accents close an altogether fascinating mosaic of atmospheres.
Posted by Zen Archer at 12:47:00 AM