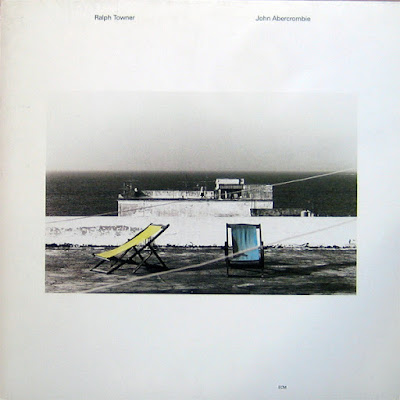 John Abercrombie is unique among guitarists in that whenever he becomes enraptured his sound becomes neither louder nor more pronounced but becomes somehow mysterious, liberated. Ralph Towner, on the other hand, revels in the crackling ruptures that so characterize his playing. Yet these roles seem reversed in this follow-up to the duo’s Sargasso Sea. A far more fragile carnation than its predecessor, it seems to forego the usual bag of tricks in favor of something more, as the album’s title would imply, reflective. This is especially apparent in the three improvisations with which the set list is dotted, and nowhere more so than in “Late Night Passenger,” where Abercrombie’s laddered filaments provide stunning berth for the other’s muted, jangling starlight.

As for composed pieces, Towner offers three, Abercrombie two. Among the former’s, the all-acoustic “Half Past Two” is a vibrating rib cage of biographical energies, and the most comely track on the album. The attraction continues with “Caminata” and on through the whimsy of “The Juggler’s Etude.” Abercrombie’s “Child’s Play” pairs electric and classical for a complementary sound, Towner’s shallower accents the caps on Abercrombie’s resonant stalks. Child’s play it may be in name, but in execution it is anything but. Yet it is in “Isla” that the reverie reaches new depths, the musicians’ negotiation of lead and backing effortlessly egalitarian. Such reciprocity is the keystone that keeps this arch from crumbling.
Posted by Zen Archer at 2:20:00 PM