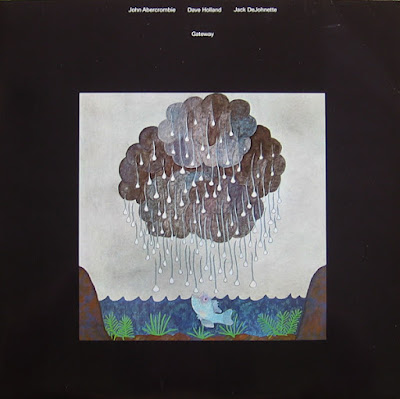 With this record, John Abercrombie both repaved and detoured from his staid path. He could hardly have been in finer company, and the combination seems to have fanned all sorts of flames within him. DeJohnette and Holland string an array of tightropes across which Abercrombie balances his way into previously uncharted territory.

“Back-Woods Song” evokes a mood that would come to define some of the later work of Bill Frisell. To be sure, the sound lives up to its name here as it awakens like an alligator poking its head above some swampy surface. Holland solos wonderfully here, after what some have rightly remarked to be a rather “creepy” turn from Abercrombie, ricocheting delightfully off the cymbals. This is very muddy jazz: viscous, opaque, and teeming with unseen life. “Waiting” is essentially a slow trek for bass that ushers us into “May Dance,” in which Abercrombie’s fingers frolic across the fretboard. Thus he brings a clear sense of continuity and of dynamic energy, scraping away at the surface of possibility and peering into its inner depths without fear of censure. The ensuing frenzy of activity resolves into a delicate bass solo, during which Abercrombie takes a much-needed breather. Holland cleverly mimics Abercrombie’s style, underscoring that same cluster concept of note value and melodic ascendency. “Unshielded Desire” is exactly what it claims to be. It starts with a percussive bang like the finale of a fireworks display and Abercrombie runs with all his might to capture every dying spark as it trails in the sky. The music goes around in spirals, flirting with a center it can never reach no matter how far down it goes, until it is like a compass gone haywire in the Bermuda Triangle. Next is “Jamala,” the most downtempo cut on the album. This is a moody masterpiece and a fine lead-in to the magical, epic, and incendiary “Sorcery I,” which rounds out the set.

I actually fell asleep the first three times I tried listening to this record. For whatever reason, its quirky energy seems to have had a soothing effect on me. Odd, seeing as I cannot imagine a more invigorating guitar trio. Abercrombie has such a distinctive sound and it has to do not only with the amplification and choice of instrument (or pairing thereof), but more importantly with the fragmented aesthetic he brings to his playing. Abercrombie is a “sensual” musician—that is, a musician of the senses. He seems to rattle his own bones, bringing to his improvisation a sense of detached wonder. Those looking for the laid-back Abercrombie may find this an unexpected outing. I do think it’s worth taking a chance on, however, as the freer moments herein might very well surprise and inspire. Despite a seemingly haphazard approach, Abercrombie remains tightly knit to the music’s immediacy. His is an electric sound that stays close to its acoustic roots, while Holland’s solos rise and fall, never straying from the core beat, as if strung to DeJohnette’s limbs.

It’s difficult to explain this kind of jazz to someone who has never heard it, and almost as difficult to describe it as someone hearing it for the first time. It is chameleonic music of the highest order. The wealth of possibility represented here in the art of improvisation expands the ear, the mind, and the heart of the listener, cracking the window of one’s worldview open just that much more to reveal the joys of lived experience. And maybe that’s what jazz is all about: experiencing the human spirit and the infinite ways in which it contorts itself to the tune of some intangible creativity.
Posted by Zen Archer at 12:07:00 AM