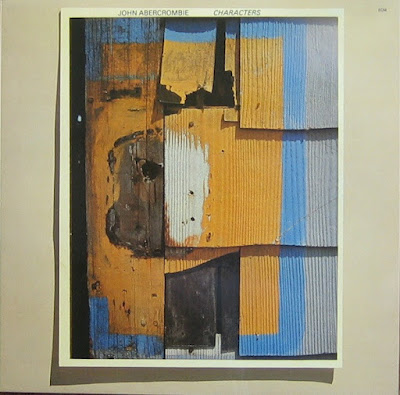 Just four months after the historic Gateway 2 session, John Abercrombie stepped into Oslo’s Talent Studio to record Characters, his first and only solo album for ECM. While the guitarist’s trademark electric lurks here and there, a modified mandolin takes the strongest lead. The album also features about as much acoustic as one is likely to hear from Abercrombie in one sitting. All of this makes for sonic perfection.

At nearly 11 minutes, “Parable” is the longest cut on the album. A plaintive mandolin seems to stretch its strings as Abercrombie adds almost sitar-like cadences until, about halfway through, we realize this is but the stem of an overarching flower, which reveals its full bloom in an acoustic umbrella. With peerless thematic acuity, Abercrombie reconfigures his melodic matrix in “Memoir,” a nostalgic acoustic duet, each channel part of a spontaneous conversation. It is the most fleeting track on the album, but also the most intuitive. Next, Abercrombie transmits a “Telegram” straight into our souls. Like the message of its title, it is formless during transmission, but arrives in tangible form through the advent of technology, of which performance is Abercrombie’s medium of choice. His involuntary humming harmonizes with itself in a subconscious overdubbed chamber choir. “Backward Glance” recalls the title of Steve Kuhn’s classic tune. Dense acoustic chording spins powerful thermals upon which Abercrombie spreads his electric wings, drawing a feathered curtain over our eyes in the final strum. The spindly diversions of “Ghost Dance” percolate like anesthesia through the bloodstream before “Paramour” makes its debut as another acoustic duet (Abercrombie would soon resurrect it at the heart of his first quartet album, Arcade). More of the same awaits us in “After Thoughts,” where every pause feels like a deep breath that is at last exhaled in a luxurious chord. Lastly, through the liquid sheen of “Evensong” we catch visions of ourselves at different ages. After a silence, an acoustic hand opens its fingers wide as one electric swells in accompaniment and the other glides like a stingray for a sublime finish.

The album’s title is a prescient one. In addition to glyphs on a writing surface, “characters” are people, animals, or any other living creature whose desires animate a story. They might also be the traits of those creatures, or even the morals that define their personalities. Here, we encounter all of these and more, threaded ever so genuinely by one musician’s unique sense of space-time. For anyone wishing to peer into the soul behind the sound, let this be your window.
Posted by Zen Archer at 12:52:00 AM