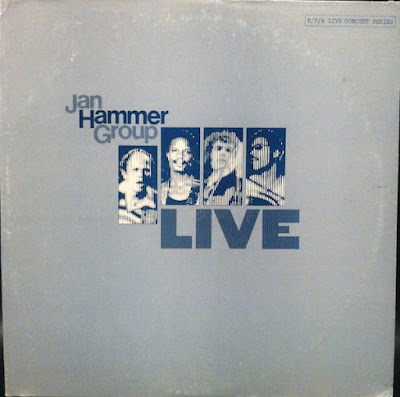 If you're a fan of Jan's synth playing, this is a must-listen. I'm a long-time synth player myself and I think this is his best playing on record. People who remember hearing the JHG live know that there are few recordings that capture his playing genius, possibly because record companies tended to shy away from extended soloing, possibly because Jan himself tended to keep the solos shorter as time went on as a response to a real or perceived lack of interest by his fans (particularly after Miami Vice). In any case, he really cooks on a few of these tunes. I first heard this record after buying it in Rasputin's used record shop in Berkeley CA around 1980. It was a limited radio station-only release called "Melodies LIVE!" which was released just prior to Melodies. Until this release in 2014 I was the only person I ever ran into who had ever even heard it. I'm quite sure Jan plays his custom monophonic Minimoog portable analog keyboard controller (the one with the tilted box for left-hand controllers) which pre-dates his historic Powell Probe. Though the playing is monophonic, this is a "power trio" configuration adding violin, and Jan acts the part of rock guitarist here - using his signature distorted sync sweep sound throughout - the polyphonic version of which sweep him to fame as the "guitar" in the Miami Vice theme. If you want to hear a whole record of that kind of sound, albeit monophonic, this is your ticket. Bottom line: this album best captures Jan absolutely cooking on synth in a solid rock and roll format, with his solos typically coming toward the ends of the pieces. Highlights: "Just for Fun," "Who Are They?," Blue Wind (complete with Oberheim FVS going famously out of tune) and especially "Earth (Still Our Only Home).
Gonga

Stripped down to a power-quartet, Jan Hammer's 1977 group had toured in support of their 1977 album 'Melodies'. This radio-promo-only release contains extended live performances of some of these songs. Well recorded and mixed, it was a good representation of that band as it tried to cross-over from jazz-fusion into power rock-territory. Fans of this Jan Hammer Group will probably enjoy it if they can find a copy.
Posted by Zen Archer at 12:34:00 AM