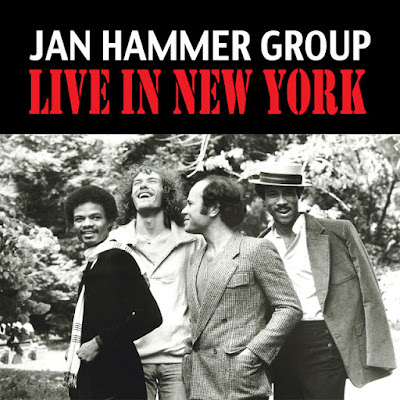 
New Jersey Dispatch - October 18, 1975
-
Hammer Creates Surreal Session
-
By LARRY VIANELLO
-
The Jan Hammer Group's concert the other night at The Bottom Line, was complex without being pretentious, the performance virtuoso without seeming egotistical, the mood simultaneously relaxed, and nervously exploratory. Hammer, a master of keyboard instruments including pianos, synthesizers, digital sequencers, and the mellotron as well as the drums lit the stage with a blaze of total space age jazz improvisation. Forget Rick Wakeman and Keith Emerson. This 27-year- old Czech- turned American citizen, who bears a vague physical resemblance to Elton John, is undoubtedly the keyboard man of the future. This polyrhythm master gets your pulse beating from the tip of your tapping toes to the last shock of your hair. Hammer, smoothly changing from a piano modified to sound like a guitar to a low register organ as aptly backed up by drummer Tony Smith (formerly of Malo and Azteca) and bassist Fernando Saunders. The other lead instrument in the four-piece band is the electric violin. Steven Kindler, who like Hammer, is a former member of John McLaughlin's Mahavishnu Orchestra, complemented the keyboard solos and handled long passages of seemingly ad libitum jazz passages with the adroitness of a super star. His talent should have been noticed long ago. This music soars into outer space at the speed of light, no holds barred. This observer feels he must warn those listeners who are faint of heart to stay away. This kind of energy might give cardiac arrest to the modern jazz listening neophyte. Unfortunately, Hammer did only one number and the intro to another from his latest album, "The First Seven Days." This piece of craftsmanship is a delight right down to the cover.  This album matches the creativity imagined to have gone on in the first seven days of heaven and earth. Especially fine is the final cut, "The Seventh Day," where an eerie celestial mood is intermingled with the earthiness of syncopated piano work that changes its time signature with each measure. It is the final climax to a spellbound creation of the imagination. Hammer's music is at once primal and seething, teeming jungle undercurrents, and the most far-out adventures of a star trek to unknown thresholds of the mind. Its success lies in outstanding classical study and unending determination for new frontiers. It is the music of the future and it is older than man.

Truly epic solos from Jan Hammer on this release. Red and Orange is simply on fire. Hammer throws down some fantastic solos. Steve Kindler lays down some impressive violin solos as well. Tony Smith is superb throughout. I Remember Me is another highlight for me. The drums and interplay are top notch. If you want to pick up some Jan Hammer post Mahavishnu Orchestra this is a good one to get. The only problem I have is the obvious editing on a few tracks... plus you just know there is more music out there from this show they had to have dropped for the release. HOT!
Posted by Zen Archer at 1:23:00 AM