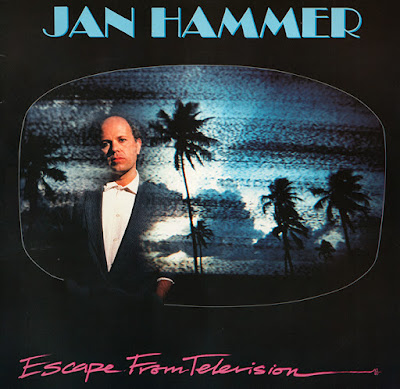 
Writing this kind of column involves a certain amount of guesswork. The albums come in early and music critics are supposed to imagine how much, if any, impact a given work will have out- side the columnist's turntable room.
Of course, our ilk often sink into a Public Be Damned mode, perching ourselves on the end of a limb and daring anyone with a saw to prove us wrong.
I've ended up at the bottom of the tree. more than once: canonizing singer/writers like John Hiatt, John Prine and Steve Goodman for example, none of whom has ever risen above cult level. And then there was that review of the new pop singer I considered over- promoted, with a "strong voice battling the usual disco/soul mush," Whitney Houston.
But I seem to be doing all right in calling the career of one Jan Hammer, best known as the ace composer of "Miami Vice" music.
When the show was on the brink of cancellation, I put together a three-part, Nielsen Be Damned series which culminated in an interview with Hammer. Just before the third column was published "Vice" associate Producer Fred Lyle told me that NBC was renewing.
I predicted not only Hammer's Emmy nomination but the establishment backlash which would rob him of the "Outstanding Achievement in Musical Composition" award. ("Murder, She Wrote" won the statue that first year.)
When Hammer reacted bitterly and felt like quitting the show, I suggested producer Michael Mann hire him someone to lighten the weekly load. They have.
My interview column also revealed that the composer had been a child actor in his native Czechoslovakia and I asked if he'd enjoy a small on screen role in the crime drama. Sure, but no time, he answered. By golly, though, next season there he was, doing a cameo in a wedding scene, type-cast as the organist.
All these are examples of correlation, of course, not cause and effect. Mine is a nice little column but probably not real influential out there in Television Land.
TV is the career which Jan Hammer has been trying to phase out of. The album Escape From Television is his bridge burner. Ten of the 12 instrumentals are from past episodes. All are remarkable, for several reasons.
Even with the many bad imitations around, Hammer's "Vice" work remains unique. The sound is clearly different from the telegraphed schmaltz of the competition; different even from much of the groundbreak technique of new motion pictures.
Hammer's style does what good movie music should do: help develop the visual plot, draw the characters, signal the emotion. Sometimes the effect is subtly ironic, in contrast to Lyle's often outrageously pointed choices of pop tune insertions. As this collection shows, the TV pieces are good enough to stand alone. That was confirmed two years ago when his elongated version of the show's theme hydroplaned to Number 1 on the Hot 100
What is most amazing to me is that he created these gems—and the underscore for 69 full episodes —on a weekly deadline. The Tuesday he talked to me he had just begun looking at incomplete video cuts of a show which would air a week from that Friday. Moreover "Miami Vice" is filmed in Florida and edited in California. Jan Hammer lives and works in a farmhouse in upstate New York.
Escape includes two new compositions, "Forever Tonight" and ‘'Before the Storm." They are upbeat and fairly conventional. I'd like to hear them with lyrics. (Har.)
Three tracks are especially familiar to fans of the series. “Crockett’s Theme,” a multi-million seller in Europe, has been used sporadically during the run most recently in the Sonny Gets Shot episode late this season. The slice never fails to make me feel warm and lazy.
"Rico's Blues" sews a very sweet guitar line through thick furry musical fabric. Despite that overall feeling, there is something imperceptibly dangerous going on here.
The 2:26 "Miami Vice Theme" is fun to listen to, but I still prefer the 1:00 TV version. Although l usually timeshift "Vice" on the VCR, I never fast-forward past those sparkling credits. Somehow, the theme "contains" those 69 episodes inside its 60 seconds.
Jan Hammer was born six time zones east of upstate New York. But he has become an American original.

There are a lot of things working against this album before it even gets out of the gate; the music on here was made in the 80s, a lot of 80s sounding early digital keyboards were used in it's making and the songs on this album were created to serve as background music for some cheezy 80s TV shows. The big suprise is that this album sounds pretty good, especially if you take it for what it is; background music.
This isn't a true soundtrack album, instead what we have on here are twelve seperate semi-pop instumental songs that contain great original sounding, and often melancholy, melodies wrapped up in excellent innovative arrangements. Usually 80s keyboards are annoying, but occaisonally they seem to fit 80s music better than classic 70s analog keyboards would. For instance, some of the better 80s Genesis songs have unique keyboard parts that actually fit the song better because Banks is using the thinner more plastic sounds of that era. It is all part of a weird principal in which if something that is usually bad works, than it works better than something that is usually good.

Not all of the songs on here are pop oriented, some get into world music territory and others sound like prog-rock lite, sometimes even sounding like an easy listening version of Hammer's old Mahavishnu Orchestra. This album is not for everyone, but there are some listening groups that might like this kind of odd instrumental album. First, it's possible that people who like slightly progressive 80s pop rock groups such as Genesis, Asia or Toto might like this album. Also, people who like lite-rock groups who play lite- classical pieces, for instance groups like Sky or Mannheim Steamroller. Finally, people who like that unique style where instrumental progressive rock meets exotic lounge music, ie Manzenera's Primitive Guitars, Bo Hanson's Lord of the Rings or Fripp and Summer's Bewitched, might be able to dig this album.
Posted by Zen Archer at 1:08:00 AM