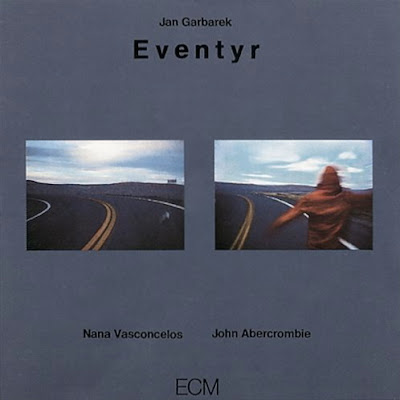 A strange flute it was! It emitted a note as sustained as the whistle of a steam-engine, but much more powerful. It penetrated through the whole manor, over the gardens, the woods, for miles out into the countryside, and with the sound of it came a great gust of wind roaring.
–From “Everything In Its Right Place” by Hans Christian Andersen (trans. L. W. Kingsland)


Eventyr means “adventure.” Classical listeners may also recognize it as the name of Frederick Delius’s lovely 1917 tone poem, which is often translated as “Once Upon A Time” to underscore its origins in the folk tale collections of Norwegian scholar Peter Christen Asbjørnsen. Here, the name adorns one of Jan Garbarek’s most recondite efforts to date and, like its own “Once Upon A Time,” houses a world of lessons and signs for those willing enough to interpret them. Joined by John Abercrombie and Nana Vasconcelos, he spins a string of seven improvisations, rounded out by a standard, “East Of The Sun And West Of The Moon” (Brooks Bowman), that doesn’t so much end the album as open us to its nebulous center. In that center we encounter swirls of majesty as only he can draw. With almost liquid fire and ever-insightful phrasing, Garbarek brings his deepest considerations to the nearly 12-minute “Sora Maria” that is its primordial soup. His interplay with Abercrombie resolves into a vague continent, where only the playful refractions of “Lillekort” resolve themselves into separate entities. Vasconcelos’s pliancy is the animating skeleton of the title track, in which his gravelly voice and ritualism exudes from every gamelan hit. In “Weaving A Garland,” tenor sax and guitar paint a rolling horizon of vegetation. Such shorter tracks as this and “The Companion” comprise the more potent incantations amid the long-form spells that otherwise dictate the album’s vocabulary. Transcendence comes in the form of “Snipp, Snapp, Snute,” a sparkling menagerie of triangles and wooden flute that works its light into a crepuscular sky. Through it we see in fine detail the inner life of three musicians whose nets run far into the cosmic ocean, where only transformation awaits in the catch.
Posted by Zen Archer at 2:05:00 AM