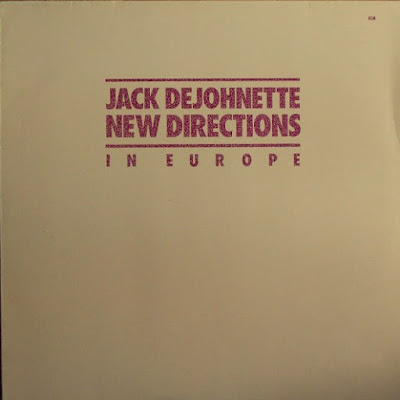 
There is a moment in “Bayou Fever” when Jack DeJohnette, showing his adeptness at the keyboard, lapses into “America the Beautiful.” This brief quotation anchors the piece, making it all the more poignant for having appeared in this historic live set. This eighteen-and-a-half-minute juggernaut is as gentle as it is lengthy, and embodies well the lively spirit that infused the drummer’s New Directions project. With the introduction of Eddie Gomez on bass, we hear the call of vocation, the instinct that allows us to persevere through even the most trying circumstances, if only to taste the beauties of creation one more time. Six-stringer John Abercrombie weaves his fingers through the loom of reflection, adjusting the microscope until the dividing cells of Lester Bowie’s trumpet come clearly into focus. This quintessential chunk of tactile birth cycles through a chain of experiences, each the sum of another life before. Once DeJohnette reverts to his forte, he nurtures an inward-looking fluttering of sticks. Abercrombie matches with a fluttering of his own as his nimble hands leap across the fingerboard with an energy that seems to draw audible gasps of expectation from the audience, but which never quite materializes into the full rupture we might expect. One hears in this not hesitation, but rather a more subdued commitment to melodic integrity that praises the living effect of performance over its virtuosity.

It’s a far cry from the album’s opener, “Salsa For Eddie G.,” which begins in the mountains before sliding down their sunlit faces amid scintillating articulations from Abercrombie. With prime support on all sides, DeJohnette is free to move forward without ever looking back. No matter how exploratory he becomes at the skins, his foot keeps the hi-hat going steady, leaving crumbs of light on a dark and winding trail. “Where Or Wayne” begins quietly enough, but then strains a terse improvisatory energy through a fine mesh. The palpable charm throughout provokes laughter from musicians and audience alike. During this portion of the show, DeJohnette introduces the musicians, after which Bowie returns to the foreground and blows out the candle with a flourish of finality.

While the music on In Europe does stretch its very skin to the limits, especially in the trumpet, it manages never to injure itself irreparably. The closest we get to pure abandon is “Multo Spiliagio,” a free-for-fall which contorts its body through many acrobatic challenges. Yet even the most explosive moments are somehow delicately circumscribed. It is an exercise in maturity and critical thinking that ends in sheer delicacy.

This altogether respectable outing gives us a concerted taste of an unrepeatable period in musical history, a time in which the music world’s progress was being most clearly charted on the jazz stage. The concert is miked in such a way that the listener feels situated right between audience and band. We can almost imagine Bowie—this recording’s brightest star—roaming about the stage, projecting his cackling brilliance into every corner of the venue, and hopefully further onto the shelf of any lover of marvelous music.
Posted by Zen Archer at 2:14:00 AM